I believe that Melaka Chief Minister Mohd. Ali Rustam, or someone in his government, is definitely a fan of public transport. How else can one explain the flurry of announcements, comments, and projects, all related to public transport, that have come out of Seri Negeri (the CM's office) over the past five years? 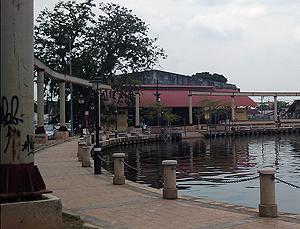 At the last count, Mohd Ali Rustam has talked about introducing an LRT, monorail, a KTM rail link to Tampin, monorail (again), a high-speed rail link from Kuala Lumpur to Singapore (via Melaka), an Aerorail, and now the proposed tram system. And on top of that, he has also talked about reorganising the bus system through contracting out public transport services to private companies.

So with all this enthusiasm from the government, why is public transport in Melaka the same as it was five years ago? The only noticeable changes have been the arrival of the PMCT Panorama Melaka bus owned by the MBMB, and the opening of Melaka Sentral - hardly revolutionary projects.

I believe that the lack of significant improvements to public transport in Melaka and other states is because the state governments are waiting for federal guidance and federal funding. Whenever I talk to people in government at the state level, I invariably hear that ‘transport is a federal responsibility according to the constitution’ and ‘we don't have the money’.

But the federal government only has the responsibility for regulating public transport. Any state government or local government can take the initiative and apply for permits and provide public transport themselves (like Putrajaya and Melaka do) or contract the service out to a private company (like Cyberjaya does). Or if they prefer to avoid the need for permits, they can simply offer free shuttle buses (like Petaling Jaya's community shuttle bus). 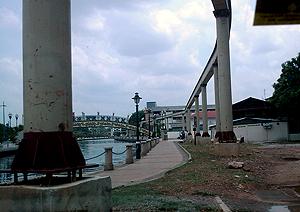 We can only hope that the new Spad (the Public Land Transport Commission) will work to encourage local and state governments to take up a greater role in providing public transport. The first they can do is download the planning and management of public transport to local or state authorities. These authorities can then hire private bus operators to provide public transport services, or operate the services themselves.

As for Melaka, the succession of announcements from the chief minister has not done much to increase the confidence of public transport users.

The monorail project is largely disappointing. The 'visualisation' of the monorail on advertisements used a copy-pasted image of the Las Vegas Monorail - a concrete, double tracked, 'real' monorail. The actual Melaka monorail is a single, metal-tracked 'theme park' monorail like the one that used to run in Bandar Sunway.

Then there is the Aerorail project, which was also 'visualised' using a copy-pasted image from the Aerobus website, superimposed over real images of Melaka. The sight of the Aerorail flying over the Stadhuys and A'Famosa drew howls of protest and laughter, prompting a new proposal which terminated the Aerorail at Jalan Tun Ali, Melaka's ‘institutional’ zone. 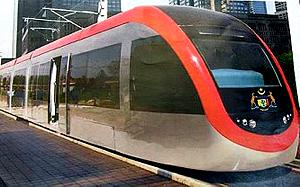 Now the chief minister has introduced a proposal for 50km tram network, using a natural-gas powered tram which is supposedly the first in the world. Interestingly enough, the 'visualisation' of the tram also used a copy-pasted image of a tram with the Melaka state government crest badly superimposed on the front.

In a way, I am happy to see that the chief minister has realised that trams are the most efficient and flexible way to move public transport - they have the speed and capacity of an LRT but their cost is far lower. For example, the Melaka tram is projected to cost about RM10 million per km, compared to the RM250 million per km projected for the extensions of the LRT.