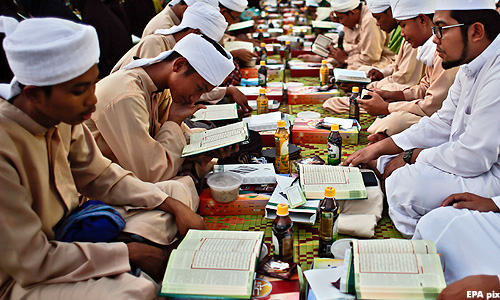 The role of religious departments

We, the members of G25, are in agreement with Khairy Jamaluddin over his recent statement criticising religious departments for spending their time and resources on enforcement duties to catch non-fasting Muslims in public.

He said that whilst it is compulsory for Muslims to abide by the five pillars of Islam, he also correctly pointed out that it is not compulsory for people to catch non-observers.

Muslims eating in public during Ramadan is definitely disrespectful to the religion and we should constantly be reminded of our obligation to show proper behaviour during the Holy Month.

Despite best efforts to inform and educate Muslims on their religious obligations, the reality of life is that there will always be the few recalcitrants who will not listen to advice.

Disobeying God's command should be treated as a personal matter. In our democratic country, we have to remember the fundamental point of law that a person is criminally guilty only if he endangers anyone's life and property or the rights and liberties of others.

By virtue of our Constitution, those who do not fast have not committed any crime to society, nor do they pose a security risk to the country.

Religious officials should be more concerned about Muslims who follow hate ideologies, as such renegades and social misfits are often recruits for violent extremism and anti-democratic forces like ISIL or Daesh.

In Europe, the police and local authorities work closely with Muslim religious leaders on programmes to educate the youth on typical propaganda expected from recruiting agents for militant and jihadist groups.

These efforts help foster Muslim co-operation in defeating the common enemy and more Muslim leaders are now speaking up to condemn the violent ideology of Islamic preachers and co-operating with the police to apprehend suspects before they go too far.

Malaysia is facing a similar situation where youths are attracted to join terrorists by extremists using Islam to promise the bounty of heaven for those who sacrifice their lives for Islamic jihad.

As this is a very real problem affecting the future of all Malaysians, our religious departments should put their heads together and combine their resources to focus on this present danger to the peace and security of the country.

Their staff resources can be used more productively to be the ears and eyes of the police to identify potential threats and deal with them now before it is too late.

More importantly, the religious departments can play a crucial role in correcting, perhaps removing those imams who make use of mosques to justify the use of violence for defending Islam against their self-defined infidels, and who call for the present Constitution to be replaced with an Islamic state.

This is contrary to the very basis of Malaysia’s Constitution. During the drafting stage in 1957, Tunku Abdul Rahman assured those who feared the possibility of the provision of Islam being the official religion of the Federation being misinterpreted, that ‘the whole Constitution was framed on the basis that the Federation would be a secular state’.

Religious departments can also play a useful role in society by engaging in humanitarian work such as feeding the poor, providing shelter for the homeless and saving girls and small children who are forced onto the streets from broken homes.

There are reports of children being recruited to become drug traffickers and some are abducted to be sold as slaves and prostitutes. Although there are many charity groups providing assistance, the problem is overwhelming and any additional help that the religious departments can provide will make a big difference.

G25 hopes these suggestions will help improve the image of Islam as a caring religion, instead of it being practised in a way that focuses on finding faults and punishing perfectly good citizens who have not done anything illegal under the common law.

Let those who commit sins answer for themselves when the time comes to meet God. The majority of Muslims are law abiding and deserve to be treated with respect.