Polling ends at 5pm. Counting starts at 6pm. Results expected by 9.30pm. For the latest updates, please click ‘Refresh’ or ‘Reload’ in your browser.

9.42pm: At an already sombre gathering of about 300 PKR supporters at the Kuala Kubu Baru mini stadium, Zaid Ibrahim is seen shedding tears. 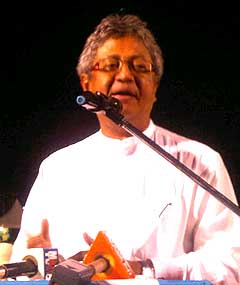 This was the dirtiest and most corrupt by-election in Malaysian (history), with rampant vote buying, when "buying votes in daylight and in the dark have been accepted as halal ," said the lawyer.

"Unless we have a commission that stamps out blatant bribery - (which acts against people who say) we'll give you this much now and the rest later - then it will always be a hard fight," he said.

But still, said Zaid on an optimistic note, Pakatan lost only 1,725 votes despite all of BN's bribery.

"We lost because of votes that were bought. We faced a Machiavellian politics. 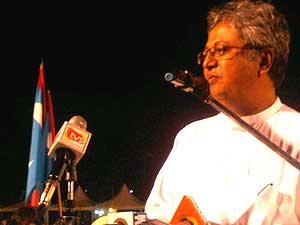 "I accept my defeat. In any contest, there must be one who is defeated.

"But let us have lost feeling contented, though we feel cheated.

PKR elections director Fuziah Salleh, too, tries her hand at consoling the crowd.

“This journey was built on our desire to seek truth and justice. If BN is desperate enough to do whatever to win, does that mean we should do the same? No! We fight with dignity.

“We will feel sad for a day or two but we will continue this journey. We will tell BN that this will not paralyse us,” she said. 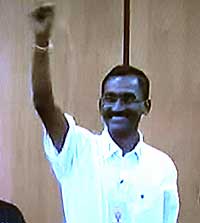 "This is not the first time that we lost. This defeat will not dishearten us. PKR had once lost so much that we were left with one sole seat. We will continue to fight," said Tian Chua.

Speaking to reporters, PM Najib Abdul Razak says the victory of the BN candidate had a great significance for BN, "because we see the results of 2008 and the results of this (by-election), and it shows that there has been a shift of voters’ support for BN nearing the 2000 levels." 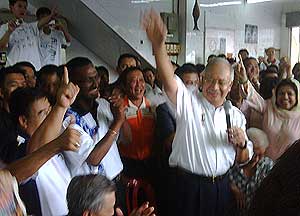 "It is very significant, because we were contesting in a state ruled by the opposition.

"When we contested before, Selangor was under the BN. But this time, we succeeded in taking back this constituency dominated by the opposition.

"With this victory, we will work hard to fulfill the aspirations of the people. Not only must we fulfill all our promises, but the expectations of the people must also be met in all aspects, whether in development, welfare or in addressing the needs of the voters in this constituency.

This victory means that victors have rejected the opposition. Their slander and their lies, these voters cannot accept," said the BN coalition chief.

Addressing the 6,000-majority benchmark set by his deputy Muhyiddin Yassin, Najib reiterated that BN was contesting on opposition territory.

“When we contested earlier, the state was under us, which meant that we were empowered at two levels - at the federal and at the state level. But now, we are only boosted by our federal powers.”

“If we can fufill all our promises and settle all the problems of the people, I believe in the next elections, we will win with a larger majority.”

Najib said further that a master-list of plans will be drawn up with Kamalanathan’s assistance to look into implementing all of BN’s promises.

MIC president S Samy Vellu, meanwhile, says that BN has won about 68% to 72% Indian votes in Hulu Selangor. He takes this as an encouraging sign and says that the party will launch an ‘MIC Baru’ to be closer to the Indian community.

MCA Kuala Kubu Bharu state representative Wong Koon Mun laments that only 30 percent Chinese in the constituency have voted for BN. According to him, MCA must find a new working model to attract Chinese voters to back BN again.

He is welcomed by supporters who shouted 'Hidup BN' (Long live BN). PKR candidate Zaid Ibrahim and top Pakatan Rakyat leaders could not be seen in the hall.

8.30pm: P Kamalanathan and his wife arrives, and are standing next to Hulu Selangor Umno treasurer Zainal Sakom.

Pakatan Rakyat suffers it first loss in a state under its control. Out of the 10 by-elections since 2008 general elections, the score is Pakatan, 7, and BN, 3. 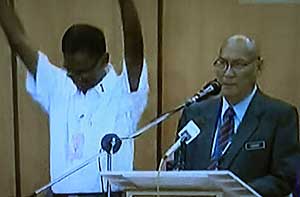 With its victory in Hulu Selangor, MIC has increased its representation in Parliament by three - P Kamalanathan is to join Dr S Subramaniam (Segamat), M Saravanan (Tapah) and SK Devamany (Cameron Highlands).

BN has won back some of voters who had refused to vote for the previous MIC candidate, G Palanivel. In the 2008 general elections, BN has bagged a collective majority of almost 6,000 votes in the three state seats under Hulu Selangor but yet lost the parliamentary seat by 198 votes.

For PKR, it has more or less maintain the number of votes it got two years ago. Zaid bagged 23,272 votes while the late Dr Zainal Abidin Ahmad got 23,177. On the other hand, BN has increased its tally by about 2,000 votes compared to what it got at the 2008 general elections. 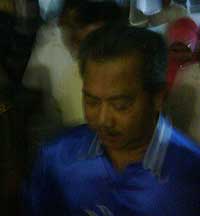 8.13pm: DPM Muhyiddin Yassin has left the BN command centre and is said to be heading towards the Kuala Kubu Bahru nomination centre for the official results.

8.04pm: Prime Minister and BN chairperson Najib Abdul Razak is on his way to the main tally centre in Hulu Selangor, an indication that the coalition has won this by-election.

Deputy Prime Minister Muhyiddin Yassin is also on his way to the tally centre in Kuala Kubu Bahru. 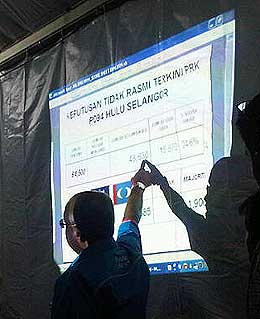 According the 'saluran' results, young voters have voted overwhelmingly for Pakatan.

In addition, it appears that Indian voters have generally return to BN's fold.

According to BN sources, P Kamalanathan (MIC) is leading Zaid Ibrahim (PKR) by about 2,000 votes.

BN sources are claiming that they are leading by 3,000 to 4,000 votes. According to Umno Youth chief Khairy Jamaluddin, the unofficial tally so far is:

Early results show PKR winning two-thirds of the votes in Chinese-majority areas, below the 85 percent which DAP supremo Lim Kit Siang has wanted. According to Lim, PKR will need to win that much to win.

It is expected PKR will lose much of the votes in the Malay-majority Felda areas.

About 33 percent of the votes have been tallied so far. 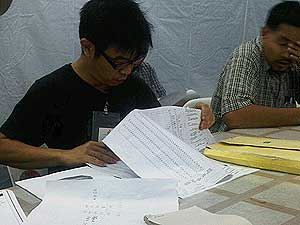 Most of the Chinese-majority areas have been counted, with PKR leading by 1,226 votes. About 30 percent of the votes counted.

The votes in the Malay-majority areas have not to come in. PKR is expected not to do well in these areas. The race for Hulu Selangor is still open.

200 BN supporters are waiting at the BN command centre in Bukit Sentosa, though the ruling coalition’s top guns have not appeared yet.

Only Umno secretary-general Tengku Adnan Tengku Mansor and party vice-president Shafie Apdal are sitting in the meeting room looking on at the latest election results. 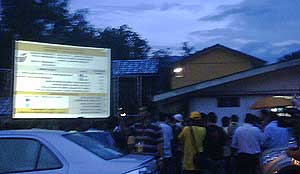 According to early results, PKR is leading by a wide margin in Chinese areas and by a slight margin in mixed areas and is trailing behind BN in Malay areas.

For PKR to win, it needs to win big in Chinese and mixed areas to cover its expected loss in Malay areas.

6.10pm: Counting has begun for the Hulu Selangor by-election. According to unofficial results, BN has won the postal votes.