Umno Youth chief Khairy Jamaluddin's challenge to the DAP to provide figures on the number of Malays joining the ranks of this centre-left party, not to mention Professor Khoo Kay Kim's rather jaundiced view of Malay leftist as "non-freedom fighters", is further evidence of the party's desperate need to define what it means to be Malay, both historically and in the present.

Umno's continuing efforts at creating the perception of a monolithic Malay polity has veered from the insidiously sophisticated to the downright crude.

Every facet of Malay life as projected by the state's media propaganda organs has been to present the image of the Malays as a unified voting block raging against the liberal foreign ideas of the DAP, the eroding Islamic ideals of PAS or the immorality of Anwar Ibrahim. 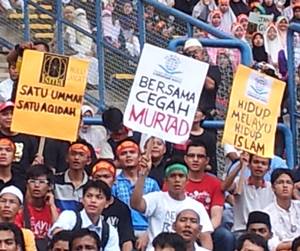 What Umno desires, and has received for so many years, is total submission from the sizeable majority of the Malay population.

The recent Christian conversion controversy - that Christian proselytising is against the law in a supposedly multiethnic and multi-religious country is further evidence of the ruling regime's fear of not only the diminishment of the role Islam in the public and private lives of Malays but their control of it - implies that a certain segment of the Malay population is not getting any part of the largesse that is supposed to trickle down to them and that they are more then willing to seek elsewhere the assistance they need.

It has of course gone to ridiculous extremes as in the recent NFC (National Feedlot Corporation) fiasco where Ibrahim Ali and his ilk (bolstered by the right-wing state-controlled Malay mainstream press) suggest that an issue of corruption is really an issue of race and a racial provocation against the Malay community. 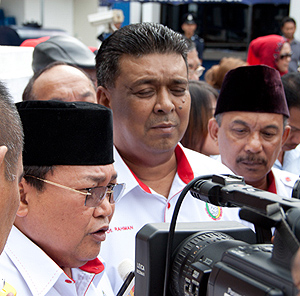 The fact that the alleged whistleblower has been identified as a non-Malay is par for the course in this country's national political debate.

And let us (non-Malays) not assume the high road because we, too, have played the same racial card when it comes to the shenanigans of non-Malay political parties.

In any other functional democracy an investigation into a case of corporate and governmental malfeasance would be handled with the utmost impartial diligence or at least that's the perception the powers-that-be would attempt to convey but here, the fact that the state responded in its usual fear-mongering fashion is an overt threat to non-Malays that they should never attempt to impose any accountability on the government or its financial policies, less they inadvertently start a racial incident.

However, these tactics are fast becoming obsolete since it was a predominantly Malay political party with the vocal backing of its non-Malay allies that first exposed this scandal and the very real fractures within the Malay community that Umno for so very long has been trying to hide or stamp out is being given expression on the national stage.

Professor Khoo's interpretative stance when it comes to the contributions of the Malay left to the independence of this country may favour the Umno narrative but what the current debate proves is that the Malays even then were not some sort of monolithic entity bound by the same political ideology unlike what our state-coddled history professors teach us.

Professor Khoo uses the tired old clichés of communism (anti-religion) and world domination (conveniently forgetting that we were a British colony) to misinterpret a polychromatic Malay left to bolster the narrative that only the Umno-led coalition and the so-called social contract ensured our independence and political and social stability.

Readers' interested in a sympathetic perspective of the diverse nature of the Malay left of a pre- and post-colonial Malaya should read Said Zahari's memoir, ‘ Dark Clouds at Dawn ', to understand how even elements in the British colonial establishment considered a paper like Utusan Melayu a "pinko" or "red" newspaper, a charge vigorously denied by then editor Zahari.

The very fact that a certain segment of the Malay-Muslim population were not hostile to the so-called liberal concepts of self-determination, social justice and fair play - as though such concepts are anathema to Islam - is evidence enough of the ideologically diverse nature of a pre-independence Malay community. A community as yet infected by the propaganda of BTN (Biro Tatanegara) and the stranglehold of a federal government.

If the concept of what constitutes a Malay is complex historically with different connotations of culture as exemplified by the various different traditions and mindsets of various states, is added to these days' constitutionally-created Malays, the mix becomes more explosive.

As I have argued before, the concept of Malay has changed so dramatically over the years through the social engineering agenda of Umno, these days it would be easier for the divergent forms of political and religious ideologies which manifest in the Malay community, to further fracture the concept of ‘Ketuanan Melayu' and in the end, the Umno choke hold.

The shortsightedness in the creation of constitutionally-created Malays will have severe repercussions on Umno and in the end, the country.

For the former, it will be the gradual erosion of influence of the so-called "authentic Malay", a topic of conversation that seems to be de rigueur in the hushed confines of the mosques but more importantly, the corridors of power.

The not-so-recent inclusion of Malaysian Muslim Congress (Kima) as a non-voting member of Umno is like the recognition bestowed on an unwanted child born out of wedlock.

And let's not forget the Indonesians, Burmese and Filipinos that have been granted the status of Malays outside the Umno-controlled peninsula and we have a situation pregnant with the possibility of some sort of national renunciation. 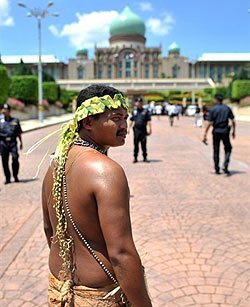 Meanwhile, the Orang Asli who have long been denied the benefits and privileges accorded to the bumiputera, will continue to be ignored by mainstream political parties until they organise into a cohesive political force which would further tensions within the Malay community.

The consequences for the country will of course be dire. Not only will there be sectarian violence within the Malay community but most probably as has been documented in various parts of the Muslim world, the nature of the conflict will be religious based.

If we are lucky it would be between two extremes, but the reality will probably be that non-Malays will either have to leave this country or latch on to whichever side that offers the least subservient role.

Khairy and indeed others of his temperament should be concerned of the fact that more Malays could be embracing the DAP.

This demonstrates that they feel no affinity for the religious brand of politics favoured by PAS or the strong whiff of Umno-ism emanating from PKR.

They have chosen a third, more secular route. Now, by no means does this mean that they are abandoning their religious world view, merely that they don't see their Islamic perspective threatened by the political framework of the DAP.

Part 2: The fracturing of the Malay community