BN deputy chairperson Muhyiddin Yassin has urged Gelang Patah voters to reject the politics of DAP, which he described as being "racist, divisive and chauvinistic".

"I think all people in Gelang Patah know Lim Kit Siang. We know his history, he likes to move around, move from one place to another place. He is not quite loyal to his constituency. 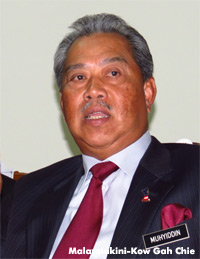 "In addition, Johoreans, especially Gelang Patah people, know very well the politics practised by DAP which (itself) is divisive, racist and chauvinistic.

"This is not in line with the practice that has been going on in Johor, where all races work together, respect one another without jealousy.

"That's why we see the Chinese in Johor are among the most advanced in Malaysia. The same goes for Malays and Indians here."

Muhyiddin ( left ) made these remarks at a press conference after meeting more than 6,000 Chinese school heads and teachers in Johor Baru this afternoon.

This morning, Johor BN had officially announced that caretaker Menteri Besar Abdul Ghani Othman will be moving from his state seat of Serom to Gelang Patah, setting the stage for a grand battle between him and Kit Siang, the DAP parliamentary leader who had announced his decision to contest the Chinese-majority parliamentary constituency early this month.

When asked for comment about the withholding of candidates in three MCA seats in Johor, Muhyiddin said that he hoped the issue will be solved in 24 hours as it requires "adjustments" due to several latest developments which he did not elaborate on.

'Teoh is good, but not good enough'

On another note, when queried on Gelang Patah MCA division chief Jason Teoh whose supporters had protested against him being dropped as the candidate in that area, Muhyiddin noted that MCA 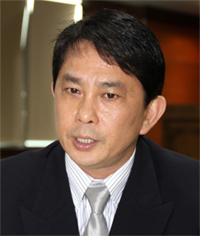 president Dr Chua Soi Lek, BN chairperson Najib Abdul Razak and he himself had contacted Teoh to explain their decision to choose Ghani instead of him.

"Although we admit that he is a good MCA leader who has been working on the ground for three years and has hired 10 special assistants, but the person who contests the seat is Kit Siang.”

He added that Teoh ( right ) is still young, with plenty of opportunities awaiting him in the future.

"We hope he will calm down his supporters... I believe he will respect the decision of the party and the government," he said.

After last night’s 1,000-strong rally to support Teoh, his supporters are calling for another rally tonight at Taman Universiti, Skudai to urge Chua and Najib to reconsider fielding Teoh in Gelang Patah.