Peeved with Khalid for claiming, among others, that the lawyer has a bad reputation concerning statutory declarations (SD), he said: "These comments are clearly defamatory of me and I am presently in consultation with my lawyers on my legal options in this respect."

Americk issued a point-by-point response, which included addressing Khalid's statement in the New Straits Times that it is not the first time the lawyer's client disappeared after making a SD.

However, the lawyer replied that the current case is different from the controversial one he handled in the past.

"At least this time my client had the choice of 'disappearing' voluntarily," he said, without elaborating. 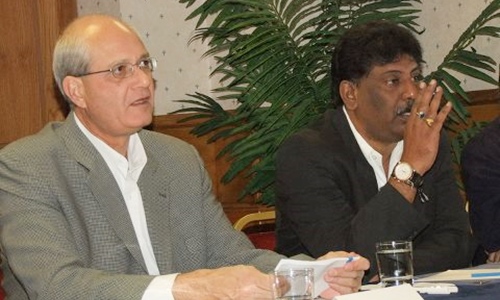 This was an obvious reference to the late private investigator P Balasubramaniam ďź photo ďź, who shocked the nation with his SD in 2008 linking Prime Minister Najib Abdul Razak (who was then deputy premier) to murdered Mongolian national Altantuya Shaariibuu.

Twenty-four hours later, Balasubramiam made a second SD which withdrew several paragraphs related to Najib and fled to India.

The private investigator returned to Malaysia in 2013 and changed his tune again, swearing in the name of God that the first SD was correct.

He, however, died of a heart attack in March that year ahead of the general election, where he was supposed to campaign for the opposition, which led to a slew of conspiracy theories.

The authorities dismissed his claims while Najib repeatedly denied any connection with the gruesome murder of Altantuya and even swore on the Quran to emphasise his innocence.

Curry puffs have been ordered

Meanwhile, Americk cited the Federal Constitution in response to Khalid's poser on why Charles chose the former to represent him.

"Actually a person has the fundamental right to be represented by counsel of his choice. This is also embodied in Article 5 of the Federal Constitution," said the lawyer.

Americk also pointed out that his client is an adult in relation to Khalid's statement that the lawyer has a responsibility over his client and is answerable to questions pertaining to the SD.

"My client is responsible for himself because he is a grown-up. I am not answerable to any questions pertaining to the SD because I did not affirm it.

"The person answerable for the contents of the SD is my client because he declared those contents to be true, not me.

"It would, however, be comforting to know that the IGP is investigating the allegations made by my client. Perhaps the IGP may want to reassure us that he is," he said.

As to Khalid stating he has yet to be notified if the lawyer e-mailed the SD to the police, Americk said the SD and all exhibits were sent by e-mail to one Inspector Munusamy of the Sentul police station on Nov 27.

"The reason why I sent the SD to this gentleman is simply because he politely asked me to and I politely obliged. Please check with him," he told the IGP.

On the police chief disclosing that a statement would be recorded from Americk, the lawyer said he is aware of this.

"Yes, I know the police would be doing this but I don't know what for. An inspector has already contacted me and we have arranged to meet tomorrow at 2pm at my office.

"I have asked him to provide me with a copy of the police report made by the complainant in this matter, so I know what the interview is about. He has agreed.

"The curry puffs have been ordered," he quipped.

The SD by the brother of murdered senior deputy public prosecutor Kevin Anthony Morais made headlines after it implicated Najib and his wife Rosmah Mansor.

Charles, who left the country immediately after revealing the SD to the media, alleged there was a conspiracy in his brother's case and claimed to be in possession of a pen drive with details of the cases Kevin was working on prior to his death.

Six men have been charged with the murder of the former DPP while two others, including an army doctor with the rank of colonel, were charged with abetting.

One brother seeks truth, the other wants to bury it