SPECIAL REPORT Kuantan's “bauxite rush” is gaining attention, both nationally and internationally. However, beyond the viral images of the state capital that is now covered in thick layers of red dust, what is the real extent of the damage?

Malaysiakini puts together here a series of Google satellite images before and after the bauxite rush to help readers get a big picture of what's going on in Kuantan.

Felda Bukit Goh Kota Sri Ahmad Shah Beserah The excavation for bauxite-rich soil has left the Kuantan landscape littered with holes and leaves the nearby village populations choking in red dust that is potentially contaminated with heavy metals.

Much of these are happening away from the views of major population centres - but an on-the-ground survey conducted earlier this month has found new site openings that are closer to the populated areas - and which have yet to be reflected on satellite images.

Several activists have also highlighted the fear that run-off from the bauxite excavation sites may enter the nearby rivers, thus polluting the water sources for Kuantan's 700,000 population.

Malaysiakini has plotted the bauxite excavation and storage sites near major rivers - Sungai Kuantan, Sungai Mabuk and Sungai Riau - to give a picture of the scale of the problem and potential threats.

The highlighted sites are not exhaustive and some streams, such as Sungai Pinang and Sungai Pengorak, are not listed due to the lack of mapping data.

Tests by the Department of Environment (DOE) conducted in August showed the sources of raw water supply to contain high levels of mercury that exceeded the allowable standards.

More recent tests, conducted on Dec 3 by Maketab Mohamed, a professor of water quality and water quality modelling at Universiti Teknologi Malaysia, found the raw water to be within the allowed levels of contamination.

However, Maketab discovered that treated water in Semambu and Bukit Goh contained lead and aluminium, respectively, that did not comply with the regulatory standards.

He noted that the tests were one-off and could yield more serious results had it been raining prior to the tests.

His tests did not include Sungai Pengorak, where the DOE found mercury levels to be 22 times the allowable level, because this river is not a source of raw water for human consumption. 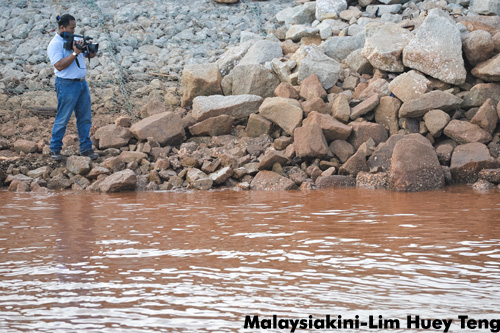 However, it is still significant, since the Sungai Pengorak, which is now muddy red, flows directly into Pengorak beach (photo) , which has also turned red for hundreds of metres outwards, where fishing is carried out.

New Straits Times in August commissioned a test on fishes caught off Pantai Pengorak and found they contained mercury levels more than 100 times the allowable 1mg/kg level under the Food Regulations 1985.

The heavy pollution there is due to the Sungai Pengorak being adjacent to Gebeng Port, which has transformed into a red, desert-like environment.

The uncontrolled ferrying of bauxite into the port for export to China is not only threatening to destroy Kuantan's fishing industry but also other export activities, with the port’s infrastructure being rapidly degraded by beelines of lorries and lingering red dust.

Beserah assemblyperson Andansura Rabu said several tenants at the port have moved out.

"Many exporters that were based there have left. How is it possible to remain at Gebeng Port in these conditions?" Andansura said, pointing to a butane storage tank in the background, covered in thick layers of red dust.

A total of 44 companies have been granted approved permits to export bauxite and the mad rush is to capitalise while the price is still good as a result of the current market shortage of bauxite. 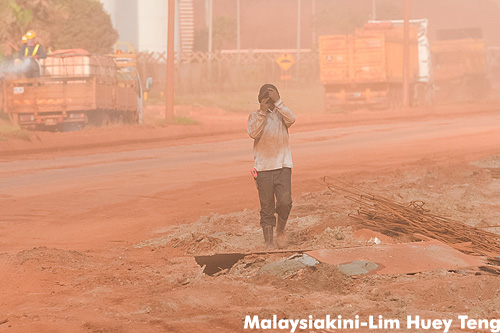 According to metal market portal Asian Metal, Malaysia, which was relatively unknown in the bauxite industry, became China's top supplier, supplying 15.8 million tonnes in the first three quarters of 2014 - a growth of more than 1,100 percent year-on-year, outstripping major player Australia.

This was in large part contributed by Indonesia, which accounted for 20 percent of the world's supply but on Jan 12, 2014, banned bauxite exports to encourage the growth of the local aluminium industry.

Exporters are only paying around RM9 per tonne for bauxite-rich soil, and up to RM15 per tonne for transportation but lower grade bauxite soil at minimum 40 percent content can fetch up to US$29 (RM124) per tonne.

If they were to take extra effort to purify the bauxite-containing soil through washing, a 45 percent minimum bauxite content can fetch a whopping US$43.5 (RM186) per tonne.

Prices are based on China's offering price, based on data from Asian Metal for early December. 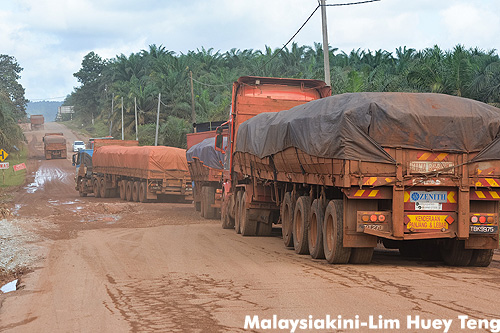 A single lorry carrying 30 tonnes of lower grade bauxite would fetch RM3,000 for the exporters and there are thousands of lorries ferrying bauxite every day.

However, this is not a clean profit, since several middlemen are involved, including hired agents who recruit local leaders, who then convince their communities to allow their lands to be excavated - or pay off disgruntled villagers.

There is payment at every stage of the supply chain, but the handsome profit means there is a large amount of money that can be splurged for the bauxite exporters to get their way.

However, as the global price stabilises, China is increasingly demanding to purchase bauxite at lower prices, which may put a strain on such splurging ways and encourage exporters to first purify their bauxite to fetch higher prices. 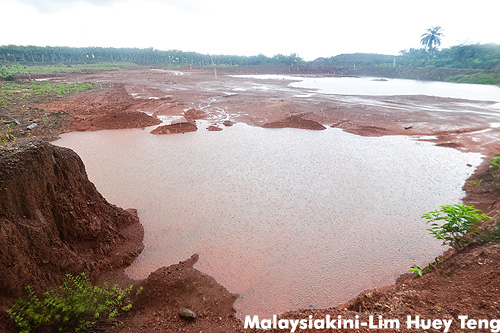 Already, several such "washing sites" have started cropping up in obscure areas and one such major site is in the interior, along Sungai Rong, one of Kuantan's sources of raw water for human consumption.

NIGEL AW is a member of the Malaysiakini Team, while Sonia Awale, an intern with Malaysiakini , hails from Nepal and is pursuing her Masters of Journalism in Advanced Digital Media at the University of Hong Kong.