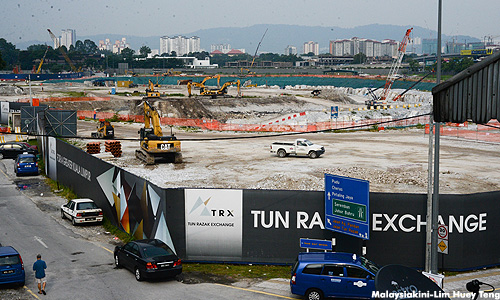 Johari must disclose how much 1MDB debts gov't taking over

MP SPEAKS Before the Finance Ministry winds down 1MDB with the takeover of 1MDB’s assets, Johari Abdul Ghani must disclose how much of 1MDB debts is the ministry taking over.

In a series of announcements since the middle of 2016, the Finance Ministry has announced that it is slowly taking over all the real estate projects from debt-stricken and scandal-ridden 1MDB.

The Wall Street Journal has already reported in June last year that the Finance Ministry has signed a shareholder agreement that will see the ministry take over 1MDB's stake in the Bandar Malaysia development project.

The agreement will see the ministry hold a 40 percent stake in Bandar Malaysia Sdn Bhd, the joint-venture company that will develop the 486-acre site of the former Sungai Besi Royal Malaysian Air Force base. The remainder of the 60 percent stake has been sold to a joint-venture between Iskandar Waterfront Holdings Bhd and China Railway Engineering Corp.

Last month, Second Finance Minister Johari Abdul Ghari told The Malaysian Reserve that "Tun Razak Exchange (TRX) is now taken over by the Finance Ministry and we are going to complete the entire project. We will complete it. We will have to finish it. Otherwise, we will have to leave it to 1MDB and they will never be able to do it."

Yesterday, the minister confirmed to Malaysiakini that 1MDB is winding down with the disposal or transfer of its assets to the ministry. "It is not winding up but it is in run-off operation. We don't conduct any new business. We can't wind up the company until all the debts are settled and amounts due from disposal of assets are collected," Johari said.

On the surface, all appears well and good. However, the big question to ask is, how much of 1MDB’s liabilities is the ministry taking over? The government must not quietly mask a multi-billion ringgit bailout of 1MDB with the innocuous announcements that the the ministry is taking over 1MDB’s key assets in Bandar Malaysia and TRX.

At the same time, has the government agreed to take over 1MDB’s RM800 million sukuk bonds borrowed from the Pension Fund (KWAP) which were meant for 1MDB’s real estate development but was instead used for other purposes?

The government should assume any of the borrowings taken by 1MDB which have not been spent on the development of the 2 real estate projects. Any amounts beyond that would tantamount to a backdoor multi-billion ringgit bailout of 1MDB which have lost billions from corruption and misappropriation.

What’s more, 1MDB has benefited from the sale of these two pieces of land after selling various parcels to third parties. For example, despite acquiring the TRX land from the Federal Government for only RM64 per square feet, 1MDB sold TRX land to Tabung Haji and Affin Bank for more than RM2,700 and RM4,000 per square feet. Similarly, 1MDB has sold 60 percent of Bandar Malaysia for a purported RM7.41 billion but acquired 100 percent of the land from the federal government for only RM1.6 billion.

Effectively, 1MDB gets to keep all of the multi-billion ringgit of astronomical profits from the sale of land it bought at bargain basement prices, while the government is forced to absorb all the loans and liabilities incurred by 1MDB.

It becomes a triple-whammy for the people of Malaysia where (i) tax-payers funded GLCs were forced to pay sky-high prices to acquire the 1MDB land, (ii) 1MDB gets to keep all the ridiculous profits to cover up its stolen billions with none returned to the Finance Ministry, while (iii) the rakyat has to foot the bill of the billions of ringgit of loans assumed by the ministry.

Johari Abdul Ghani must not hide the above matter from the public but instead provide full disclosure of the terms of the “take over” of the 1MDB assets and justify why and how much Malaysians will be forced to pay for the shenanigans which have taken place in 1MDB.