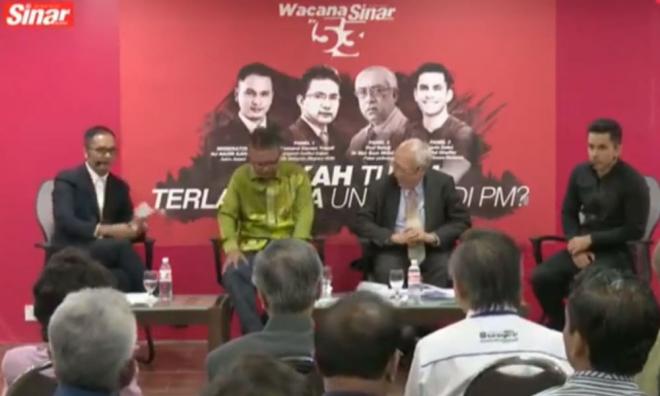 The video shows the Universiti Utara Malaysia (UUM) professor, who initially appeared to be confident and vociferous in his criticism of the former prime minister, purportedly squirming in his seat when Mahathir and his wife Dr Siti Hasmah Ali arrived and sat in the front row.

Kamarul Zaman was one of three panellists discussing if Mahathir, 93, is too old to be prime minister again.

In a Facebook posting this morning, the analyst denied that he felt intimidated by Mahathir's presence.

The clip was posted on the Kelab Che Det Facebook page with the caption, “Tengok muka prof ni bila Dr M datang macam kena telan ubat gegat. Kah kah kah. Sebelum tu bukan main lagi kutuk Dr M kan...” (The professor's face looks like he had swallowed mothballs when Dr M arrived. Prior to that, he did not hold back on his criticism of Dr M).

The clip started with Kamarul Zaman stressing on mental health as an important factor for a prime minister candidate, arguing that cognitive abilities, including conceptual reasoning, memory as well as processing speed, decline with age.

He then proceeded to cite several examples with regard to Mahathir's statements, which he claimed showed how the nonagenarian's cognitive abilities had eroded.

When Mahathir arrived, the clip featured a caption at the bottom which pointed out that Kamarul remained seated while the rest stood up and asked if he was “terkejut” (shocked).

The moderator then told Kamarul Zaman that he could interact directly with Mahathir and the latter could respond.

At this juncture, the professor, who appeared to be fidgeting in his seat, laughed and replied, “I am okay.” He then appeared to be at a loss for words, and a subsequent caption read, “Why the stuttering. Hahaha.”

The clip ended with a still image of Mahathir and Siti Hasmah posing with the panellists, and Mahathir staring at Kamarul Zaman, who was standing next to him.