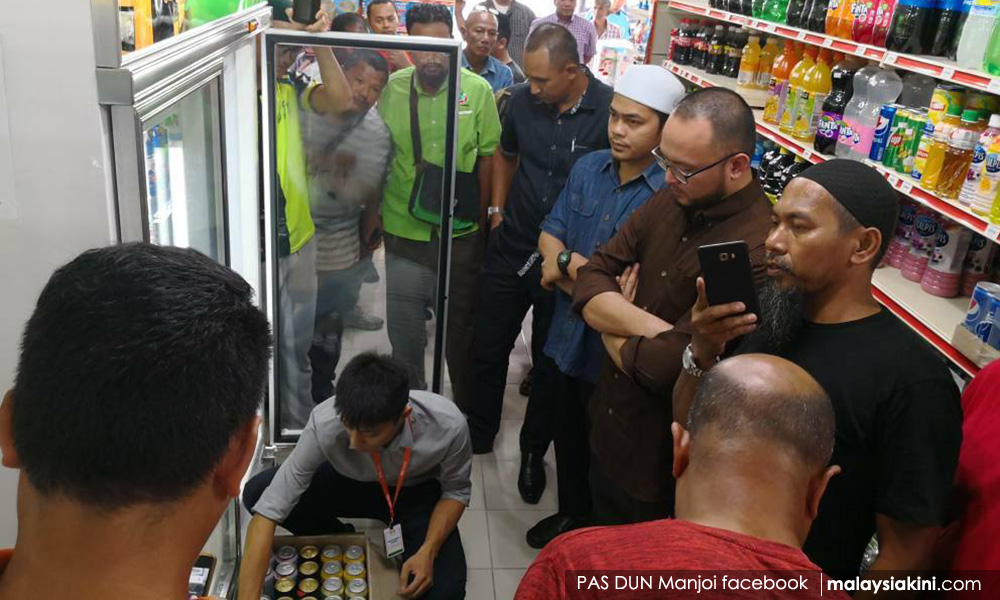 Perak MB should strike, instead of pussyfooting around

COMMENT | We have lived with Najib Abdul Razak's reign of terror for almost a decade, and that is why the video clip of men from a Muslim NGO, forcing a shop assistant, in a store in Manjoi, to empty a liquor cabinet, fills us with dread.

The assistant may have avoided a confrontation with the thugs, because he feared that he would be beaten up, or that they would return at night and fire-bomb the shop.

The timing is crucial. The thugs know that the authorities are reluctant to act during Ramadhan.

The new Mentri Besar of Perak, Ahmad Faizal Azumu, has refused to deal firmly with these troublemakers. His weakness emboldens the thugs. Worse still, is the silence of the Muslim leaders, who do not condemn the bigots.

Make no mistake, these are not righteous Muslims, who are trying to uphold their religion. They are paid thugs who just happen to be Muslims, and are using religion as a beard for their law breaking.

This incident reminds us of the bad old days of the Red Shirts and their leader, Jamal Yunos. Ahmad Faizal's meek reprimand will not stop these thugs, who have long believed that they are the master race. In the video, you can hear them issue threats to smash the bottles of alcohol, if they were not removed. 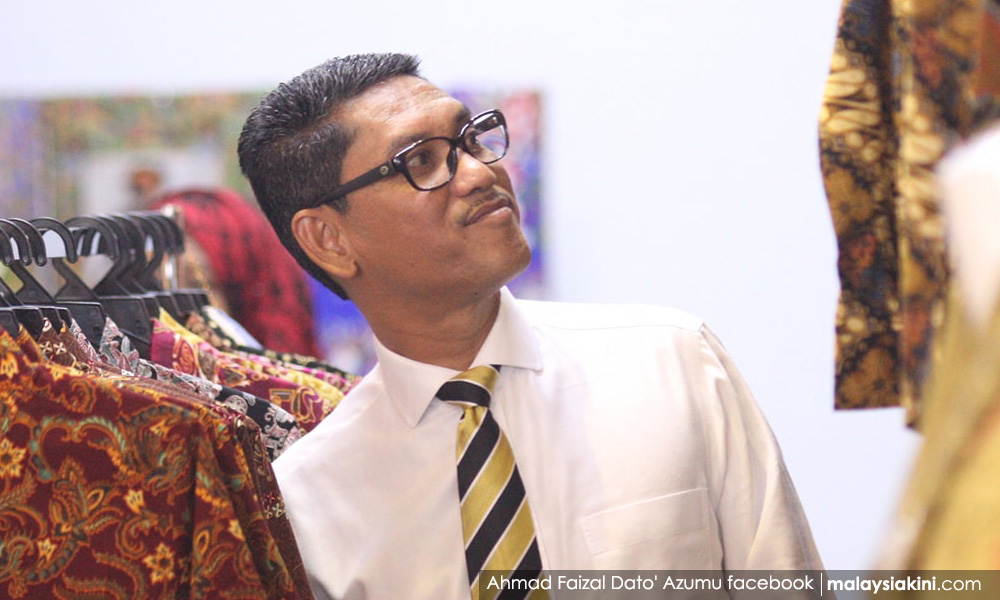 Ahmad Faizal (photo) reminded the NGO to lodge a complaint with the government about their concerns. A reminder? He does not inspire us with confidence. His actions will fail to reassure the business community.

Disband all instruments of oppression

It is time to disband all of the instruments of oppression of the rakyat, that were promoted by Umno-Baru, including Jamal Yunos' Red Shirts and the NGOs that terrorise shopkeepers, businesses and newspapers in Malaysia.

Who is to know that tomorrow, the extremist groups may target a bookshop, because they believe that the books there could proselytise Muslims. Perhaps a magazine shows women in clothes which disturb their sensitivities. Maybe a recipe book has recipes which feature pork and alcohol. Will they also target shops which sell leather goods made of pigskin? Will they demand that tins of spam, or packets of bacon, be removed?

The hallmark of the Red Shirts, is the use of violence and threats. They are usually "commissioned" by Umno-Baru to cause havoc.

Despite their breaking of the law, the former IGP, Khalid Abu Bakar, treated the Red Shirts with kid gloves. Umno-Baru kept quiet about their harassment.

Jamal may now be contained, but his thuggery is being emulated by others.

The Manjoi troublemakers held shopkeepers to ransom. They threatened the peace. They harmed community relations.

Instead of dealing firmly with this potentially dangerous group, Ahmad Faizal pussyfoots around them.

People who are vegetarians do not force shopkeepers to remove cans of Corned Beef, Spam or Serunding because it irritates them. People who abhor fast food cannot demand the counter staff to tip the contents of the oven into the bin, because the food is unhealthy.

The shop in Manjoi has a licence to sell alcohol. They have not broken the law, but those Manjoi thugs have committed a breach of the peace.

No-one should be allowed to walk brazenly into a shop and demand that the shopkeeper removes his stock. Try doing that in Tesco or Giant. You'd be marched out of the premises and prevented from returning. 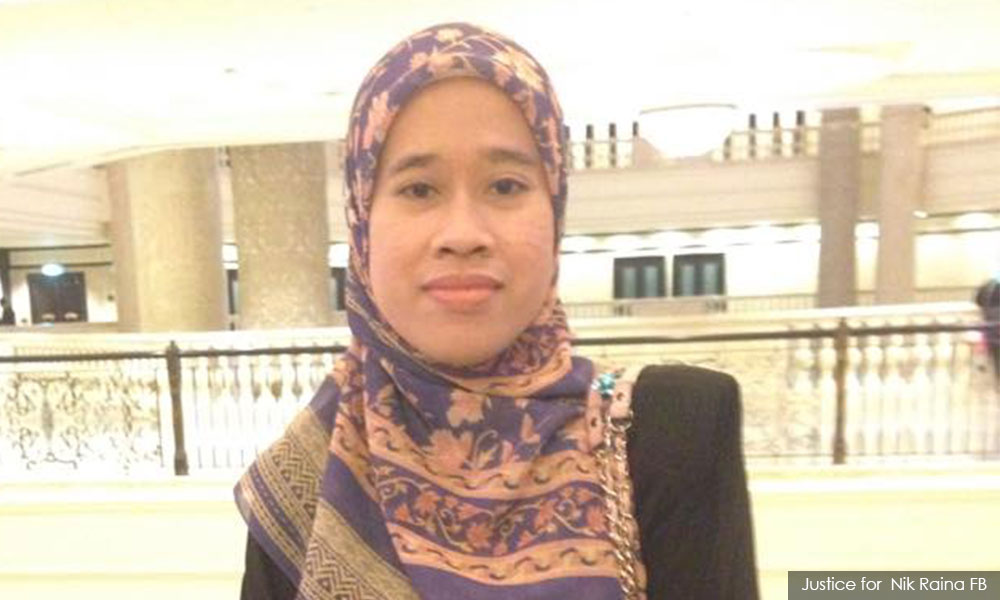 In 2012, Nik Raina Nik Abdul Aziz (photo), was harassed by the Federal Territory Islamic Affairs Department (Jawi). They targeted a woman, because it was easy.

They did not dare aim for Vincent Tan, the boss of the Borders chain. Nik Raina was an employee. She has nothing to do with the stocking and purchase of the book, which upset Jawi. The book by Canadian Muslim and lesbian author, Irshad Manji, was called "Allah, Liberty and Love".

What other reasons may have prompted the Manjoi incident? Is there a Malay/Muslim trader who wants to get rid of the competition, make his regular customers afraid and hound him out of business, so that he can take over the shop?

Are the thugs being paid by a developer, who knows that the site will fetch a good price on the property market?

Is this part of the grand design of Umno-Baru, post GE-14, to stir-up trouble, destabilise the newly formed state government, and topple it for Umno-Baru's return to power?

When the 93-year-old Dr Mahathir Mohamad stepped into his prime ministerial shoes, he was sprinting all over the place. Even his deputy, and elected MPs, had trouble keeping up with him. His stamina reminds us of a person doing the marathon. His zeal for work and his work ethic are second to none. A pity that the menteri besars are less competent.

The appointment of the Perak MB has, from the beginning, been under a cloud. To be fair, it was alleged that he was a reluctant MB. We need a strong MB who will fight for the state, and not to enrich himself, as all too often has been the case in the past.

The state needs firm handling, so that it may regain its former glory as the richest state on the peninsula. Perakians want a person who is committed, not a career politician. They do not want a compromise candidate. The MB's role is not to make buddies by not censuring those who cause trouble. The MB's main job is to turn around the state.

Perak has many issues, from its economy to environmental degradation, from tackling corruption, to community relations. It needs a capable pair of hands to manage it, but the new MB has failed to deal with religious troublemakers from the outset.

The only way to neutralise thugs like these is to isolate them, by striking at the source of the trouble and by targeting their heads. Is Ahmad Faizal prepared to do that?