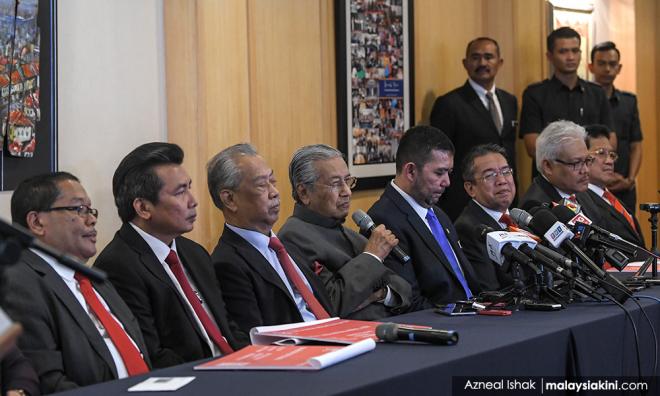 "We are mobile, we are not fixed." - Dr Mahathir Mohamad when asked about party-hopping.

COMMENT | It’s rare that a newly elected leader (only for an interim period), elected by the rakyat because of promises made by the coalition he heads, breaks key promises in a short space of time, and says with a straight face that re-assessment has to be made in the face of changing developments.

This man, Prime Minister Dr Mahathir Mohamad, who came to power as a result of a mass uprising against the kleptocratic Umno/BN government and who promised that he would not take defecting Umno/BN MPs, just two days ago handed out membership cards to seven such people with not so much as an apology for his action. Two others had defected earlier, making nine in all.

He justified this acceptance of the Umno MPs into the fold with his trademark twisted logic. Examples, as reported in theSun:

“I am now sitting on the same side as leaders I once attacked and mocked, but politicians are sometimes forced to jump ship according to circumstances.

“If you are tied to only one leader or party and stay with them even if they rob the people, then you are not a politician, but one who only cares for yourself.

“I was previously in Umno, and I left to join DAP, PKR and Amanah. But if they are no longer loyal to the country, I will also move to other parties. We are mobile, we are not fixed," he added.

In his replies (you can watch the full press conference here), he ignored the fact that he is prime minister by virtue of other parties supporting him, for his own Bersatu had only 13 seats compared to PKR’s 47 and DAP’s 42 at the end of the last polls. What he is doing now, by accepting Umno MPs into the fold now, is a tacit support of those who, by omission, clearly supported the previous kleptocratic government.

Not just that, it has been reported that all Umno divisions received money from former premier Najib Abdul Razak’s personal account which, it was quite clear at the time and well before the elections of May 9 last year, received money which came from 1MDB.

In fact, the Wall Street Journal reported in July 2015 that some US$700 million had come into Najib’s accounts from 1MDB funds. This was confirmed later by the US Department of Justice which gave in detail the money trail. These people did not oppose Najib at all, but supported his kleptocratic acts by not voicing their concern and accepting to stand in the elections. They are, therefore, irrevocably tainted.

Bolstering his own position

Mahathir does not care if they are corrupt or immoral. The only reason that Mahathir is accepting these tainted people into Bersatu is to bolster his own position within the coalition from the paltry 13 MPs he had at the end of the election to 22 now, making it bigger than PAS with 18 MPs.

That is purely as a result of nine defections. The defections are legal partly because Mahathir, during his previous rule, refused to make it illegal to jump parties. However, they remain ethically and morally extremely repugnant and go against the grain of reform promised by Harapan.

Mahathir acquiescing to defections despite earlier opposition, opens the door very wide for Bersatu to accept virtually all of the other Umno MPs - some 40 odd, if you exclude those who are clearly unacceptable like Najib. In addition to some 16 others in Sarawak and perhaps four independents in Sabah, there are some 60 more. This could swell Bersatu’s combined support to some 82 MPs.

The implications of this are enormous. If DAP and Amanah throw in their lot with Mahathir, a total of 53 seats, Mahathir’s numbers increase to 135, enough to command a handsome majority in the 222-member house, even if PKR were to leave the coalition. Another 13, not forgetting possible defections from PKR’s 50 odd members, will give him a two-thirds majority.

If PKR, DAP and Amanah stuck it out and stayed together, then they will have some 103 seats. Include Warisan’s eight, and it takes the tally to 111, which comes to exactly 50 percent of the seats in Parliament. This puts PAS in a very strong position with their 18 seats, as kingmaker.

Things, of course, may not pan this way. Any number of things can happen in the interim. But it is very clear that the situation has become very fluid and uncertain because Mahathir has changed the rules of the game to suit himself and Bersatu, something he has done throughout his 22 years at the top between 1981 and 2003.

All this means that the political situation in this country has turned rather unstable because of Mahathir and because he has been constantly shifting his position and openly in defiance of coalition politics. He wants to be in total control all the time. Hopefully, he won’t have it his way this time around.

There were many who had misgivings about Mahathir joining the Harapan coalition, including this writer, given his past record as a dictator and an autocrat who used his party’s two-thirds majority in Parliament to introduce authoritarian laws and to control government institutions which should have remained independent.

This is what I wrote in an article titled “Can Mahathir be trusted?” in April 2017, when there were moves to get Mahathir into the Harapan coalition: “If any one takes the trouble to remember what this man did and stood for, he would be mad to think that Mahathir is the solution - he was, and is, the problem. Without him and his 22 years of misrule, Malaysia would not have descended to what it is today.

“Mahathir was accountable to no one. Not the people, not the party, not the judges. He could do almost anything he pleased and get away with it using the apparatus and machinery of control he had put in place.

“He made opaque many decisions of government, putting anything marked secret by the government as secret under the law by removing the power of judges to judge even if the secret posed no danger to the country, but only embarrassed the government and exposed its corrupt ways.

“That was the legacy he left behind - and a leader who followed him used it to do nasty things, some worse than that by Mahathir. Now we expect Mahathir - the source of all this - to save us Malaysians from Najib!

“Is that why Mahathir is sticking his neck out? For the good of the country? But remember he had his chance - 22 years of it. He bungled - all he did was to stay in power and do the greatest damage to the country ever by any one, prime minister or not.

“His goal now is not to get into power, but to ensure that whoever comes into power does not destroy him. As far as Mahathir is concerned, it is always about him - not Malaysia, not Malaysians, not even the Malays.”

Now there are those who argue that he needs to get Umno members to obtain a two-thirds majority to change the constitution in order to reform. How stupid! Much of the reform that is needed can be done by just amending and scrapping laws which only needs a simple majority in Parliament.

To give Mahathir a two-thirds majority is to put into his hands a mega-weapon which he will not hesitate to use against anyone who opposes him. It is a dangerous weapon to put in the hands of a man who can not be trusted and who alters his promises to suit his ulterior motives.

Mahathir is not the person to reform this country, simply because he was ultimately responsible for most of its ills. His actions show he does not believe in reform or fair play. Mahathir blithely talks of loyalty to the nation for his shifting stand. Let’s not let him betray the rakyat who are what makes the nation.

P GUNASEGARAM says a leopard likes its spots too much to change them. E-mail: [email protected]