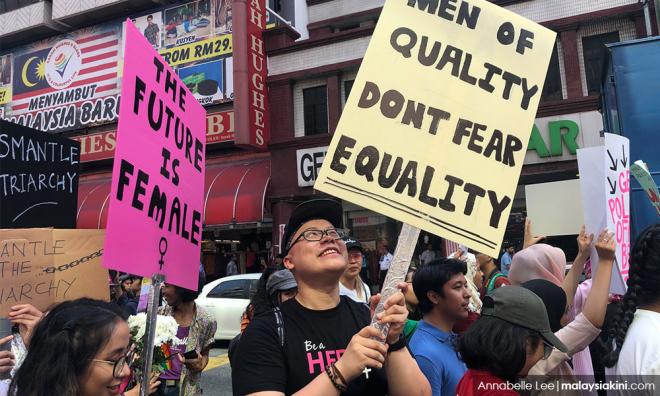 The Malaysian government’s responses towards the Women’s Day march have been heavy-handed and grossly misplaced.

In calling the march “haram” and claiming that the LGBT people are abusing democracy, the government seems to be reinforcing the harmful public rhetoric and prejudices towards women, marginalised people and LGBT people.

This sanctions further victimisation, discrimination and violence against the organisers and attendees of the march. In addition, the police also announced that seven individuals linked to the march will be called in for questioning under the Peaceful Assembly Act and the Sedition Act.

Instead of investigating the organisers and speakers of the march, a caring and democratic government should call them in for a dialogue and provide adequate protection and support to address the reprisals.

The women’s march on Saturday represented diversity, unity, strength and clarity in the articulation of our collective vision for a society free from patriarchy, discrimination and violence.

Marginalised women participated in the march precisely because they wish to be heard and to participate in building our democracy. They spoke with passion and clarity about their truth and lived realities. Targeting them, therefore, goes against the state’s obligation to protect the marginalised and eliminate all forms of discrimination and violence against women.

The government’s response to target the organizers and marginalised women for exercising their right to assembly and expression in the month of International Women’s Day is not only ironic but also oppressive and regressive. The current government had, in fact, pledged to repeal the Sedition Act and discriminatory provisions under the Peaceful Assembly Act.

We remind the Government that during Malaysia’s CEDAW review in 2018, the CEDAW committee had expressed concern over the situation of women human rights defenders, in particular, those advocating for Muslim women’s rights, the rights of lesbian, bisexual, transgender and intersex women, as well as for democratic reforms.

We reiterate the CEDAW committee’s recommendation to “ensure that women human rights defenders can freely undertake their important work without fear or threat of arbitrary arrests, harassment and intimidation, including the issuance of fatwas by religious institutions, by fully guaranteeing their rights to freedom of expression, assembly and association.”

Indeed, the threats against the marchers have resulted in adverse impacts on many women who participated in the march. As a result of exercising their right to expression and assembly, many of the women who marched have found their privacy, security and safety threatened.

The online backlash had also resulted in a significant number of people harassed by parents, friends, schoolmates, colleagues and employers for attending the women's march since the media has deliberately mischaracterised it as an ‘LGBT march’. At least four people were questioned by employers over their presence at the march, causing fear over job security and bullying.

The government must not take the side of the bullies. Denying a group of marginalised groups their right to participate in democracy is truly an abuse of democracy. In fact, democracy requires the participation of everyone, especially minorities and the marginalised.

The current administration was built upon that very foundation of rule of law and justice, with promises made in its manifesto to ensure that women are prioritised and the marginalised are included. Many diverse persons, including LGBT people, voted, volunteered as PACAs, and committed to the change in the ruling government. And last Saturday, we marched to hold the new government accountable in keeping its promises.

The government, particularly the Women, Family and Community Development Ministry, the Home Affairs Ministry and the Communications and Multimedia Ministry must stand on the side of all women. They must immediately call for an end to the threats and violence faced by the organisers and participants online and offline. Additionally, the media must stop instigating fear and hatred towards a marginalised community in the New Malaysia.

The government has a duty to remind the public to be calm and proportionate in their responses and create spaces for dialogues. The government needs to defend the women’s march as people’s active participation in democracy and defend democracy as a space for all.

This statement is endorsed by the following organisations:

Knowledge and Rights with Young People through Safer Spaces (Kryss)

Society for Equality, Respect, and Trust for all (Serata)

womensmarch
Related Reports
End violence based on gender and sexual orientation
a year ago
No permit for Women's March, says home minister
a year ago
A guide to what happened at Women’s March
a year ago
Focus on Women's March demands, stop demonising LGBT
a year ago