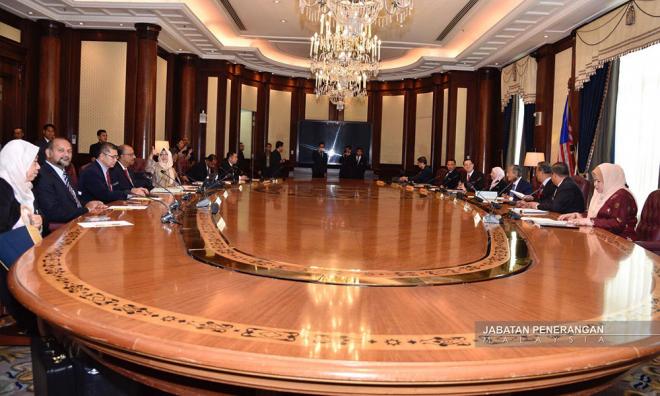 Yoursay: Cabinet fails to do its job in checking PM

YOURSAY | ‘Mahathir will be Mahathir. Is he going to change? No. This task befalls the cabinet.’

‘Watch your words, do your job' - Santiago tells Maszlee in latest salvo

Vijay47: The spat between Klang MP Charles Santiago and Education Minister Maszlee Malik comes with the traditional two sides, one relatively minor compared to the other.

First, I wonder whether it is healthy for a political party or any organisation to air in public differences between individual members. Perhaps the grievance that Santiago has could have been resolved and better managed behind closed doors amongst party leaders.

That Santiago chose to express his frustration and take on Maszlee openly may be a reflection of the reality within the Pakatan Harapan parties or, for that matter, in BN previously.

The non-Malay segments are eternally expected to be submissive to their political masters and hold their tongue, come what may. Breaking this code would mean disregarding the cause of their success and not knowing their place in our country, and that their future forays into politics may not be that rosy.

It can never be denied that we owe Prime Minister Dr Mahathir Mohamad immense gratitude for leading us out of the dark Umno days. Sadly, we seem to have replaced one Umno with another, and Mahathir himself seems to be the architect of this decline.

Many hold that it was extremely naïve of us to have been totally taken in by his promise of a bright tomorrow. The racism and religious excess we thought we were leaving behind remain, and worse, seemingly with greater momentum.

DAP has learned to its shock that being the lapdog MCA was accused of being and always playing ball to Bersatu does not work.

The question is whether its recent self-wrought injuries are fatal. Needless to say, this does not mean that the party must oppose every proposal that it may not be comfortable with.

For the whole to advance smoothly, there must be give-and-take. The unfortunate problem here seems to be that the giving is always by the same side, the taking by the other.

Sometimes, painful or harmful as it may be, a firm position has to be taken in the face of continuing domination.

Santiago has crossed the Rubicon and must face all manner of accusations, including, inevitably, that his comments regarding Maszlee are an attack on the Malays, Islam, and the rulers. I would stand with Santiago.

Specialist Batsman: I guess there is a silver lining amidst the current public uproar over the Harapan government. A big responsibility lies on your shoulders, Santiago.

All your colleagues in the cabinet are bound by cabinet collective responsibility, a constitutional convention in parliamentary systems under which all members of the cabinet must publicly support all government decisions made by cabinet and prime minister, even if they do not privately agree with them.

If any member of the cabinet wishes to openly object to a cabinet decision, resignation from the cabinet is the only option. I do not believe any minister in the current cabinet has the courage to do so.

Other lawmakers from your party and other Harapan component parties who are not a minister but with posts in government-linked companies have also exhibited uncanny and eerie silence. Keep up the good work, Santiago.

“In a sarcastic jibe, Mahathir had said, ‘I will ask for Santiago’s permission. I will get his views, he is the same level as me.’”

What level is Mahathir referring to? Santiago was elected by the people with a large majority in Klang, and if he can't raise questions, who then is entitled to question the prime minister?

This is worse than the feudal system and absolute power. More MPs must raise the people's concerns.

Middle Path: Yes, say it out if Mahathir or the education minister is wrong. Tell them there's not only the prime minister, but a council of leaders to make decisions for the sake of the country and its people.

No more reverting to the days of one man holding too much power, especially those decisions which are irrelevant or even wrong for the nation. No more.

Anonymous_1189e71d: Santiago should focus on his job as chairperson of the National Water Service Commission (Span).

How many times we have water disruptions in Selangor? Do your job and don’t worry about Mahathir. He knows what to do for the country, as he has proven so many times.

JDoe: I'm not on anyone's side here, but shouldn't it be Santiago who should be proving the education minister wrong and not the other way around?

He is the one who threw the first accusation. What is his proof? Anyway, I find Malaysian politics really distasteful these days.

Lord Denning: Top man, Santiago. You are a government backbencher and thus should be able to speak, represent and add your immense knowledge and experience to the voice of the people as you have always done.

I was wondering why you weren't given a job in the cabinet, although you were fully deserving of a significant role in New Malaysia.

It looks like it is better that you didn't. The DAP leaders in cabinet are all obviously toeing the cabinet collective responsibility line.

Anonymous_cb8eed0c: Bersatu should stop trying to prove that it is better than PAS/Umno in using the 3Rs - race, religion and royalty. Narrow racial or religious policies don’t augur well for a pluralistic nation like ours.

Anyway, this is New Malaysia. Therefore, major parties which swept the government to power, like PKR and DAP, and the presidential council (which is now made to appear like a redundant body, with the recent excursions), should be consulted when considering major controversial policies which affect people’s lives.

By the way, Maszlee, you should be grateful that Santiago did not haul you to court for defamation for calling him a blatant liar.

Bruclax: It is unfortunate that Santiago has to carry the burden of checks and balances when it is the job of the cabinet to do this. It is horrifying to watch Malaysia slipping back into pre-May 2018 habits.

Mahathir will be Mahathir. Is he going to change? No. This task befalls the cabinet.

At the rate the government is functioning, there is no hope for Harapan come the next election.