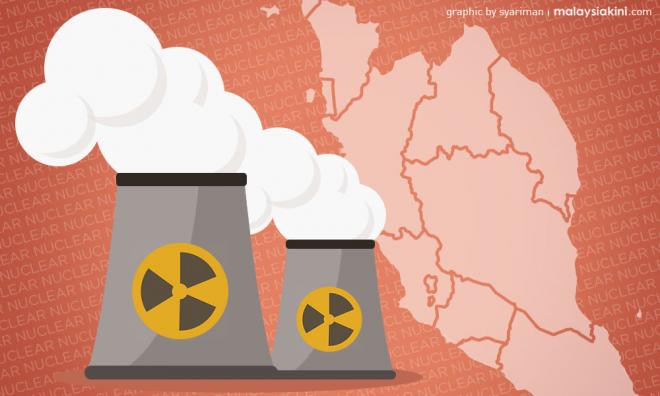 Ministry should reconsider disbandment of MNPC

The 1970s and 2007/2008 oil price hikes had triggered discussions on the need for Malaysia to consider investing in nuclear power.

After the oil crisis of the 1970s with the first oil shock triggered by the embargo by Opec in 1973-1974 increasing oil prices four-fold from US$3 to US$12 and the second oil shock prompted by the Iranian Revolution of 1979 and the 2007/2008 unprecedented oil price hike up to nearly US$145 (RM 513) per barrel, many countries, including France and S Korea amongst others, had turned away from a high reliance on oil and made investments in alternative sources of energy including nuclear power.

Malaysia’s high reliance of fossil fuel for power generation; more than 50 percent on coal, more than 40 percent on natural gas, five percent on hydro and remaining on other sources including renewable energy plus its high importation of coal of more than 60 percent from Indonesia and more than 20 percent from Australia poses a risk for its energy supply and security.

Globally, this fossil fuel economy has caused the escalation of CO2 emissions. This increasing rise in CO2, primarily through fossil fuel burning has caused an increase in the Earth’s surface temperature, or global warming, and disruption in or the destabilising of Earth’s climate system or climate change creating environmental, social, health, economic and political chaos.

In 2008, Malaysia, too, explored nuclear energy as a long-term energy source for the nation and this was incorporated in Budget 2009 as part of the government’s long-term strategy to diversify the nation’s sources of energy as well as to enhance Malaysia’s energy security and mitigate climate change.

Plans to build two 1000 MWe nuclear power reactors, with the first unit in operation by 2021, were introduced in 2010, with the prerequisite of  four conditions - there must be public acceptance of the project, Malaysia must ratify the relevant international treaties, the government must ensure that the correct regulatory framework is put in place and approvals for plan sites including from the local populace must be obtained.

It is anticipated that construction and operation of the nuclear power reactors will have significant impact on Malaysia’s economy, that during construction phase a GNI contribution of RM0.2 billion will be derived from the creation of 2,600 jobs and once operational, the twin unit reactors of 2GWe will generate GNI amounting to RM1.6 billion per year from the electricity generated

And to plan for the introduction of nuclear power in Malaysia, a Nuclear Energy Planning and Implementation Organisation (Nepio)- the Malaysia Nuclear Power Corporation (MNPC) was established in January 2011 under the Prime Minister’s Department.

The Auditor-General’s Report of 2018 outlined that since its formation in 2011 till 2018, the MNPC had produced four studies and organised or implemented three (activities) utilising developmental grant of RM42.51 million.

Furthermore, the Auditor-General’s report had highlighted that the International Atomic Energy Agency (IAEA) has recognised seven employees of the MNPC as subject matter experts who had been invited to offer advice to the IAEA and selected member states interested to introduce a nuclear power programme. Thus it is evident that skills built up during the past eight years have contributed to the competency and professionalism of the team at MNPC

The auditor’s report had also recommended for the government to provide an opportunity for the MNPC to present/table their findings of all the studies to the Cabinet in view of the importance of alternative energy sources for long-term electricity supply for the country.

Instead, Putrajaya has decided to shut down the MNPC (their last day was yesterday) for reasons best known to them and not clearly conveyed to the MNPC nor the public.

This despite the fact that the MNPC had trained its officers who are now knowledgeable and experienced regarding the techno-political aspects of nuclear power as well as nuclear diplomacy which in general are not attributes nor the experience of researchers whose focus is primarily technology development. Thus communications, diplomacy and skills in negotiations are the forte of MNPC.

Hence, even if Malaysia is not planning to invest in a nuclear power programmes (NPP) or build nuclear power plants, a wide and extensive expertise in nuclear technology and nuclear power covering not just technology but most importantly Pestle (Politics/Policies, Enery+Economics+Environment, Science, Sociology, Technology, Legal and Ethics) must be developed and nurtured amongst Malaysians to get us ready for international meetings, diplomacy and negotiations in order to be competent, skilled and tactful when meeting and negotiating in the global arena.

Thus, it is within this context that I strongly recommend for the Minister of Energy, Technology, Science, Climate Change and Environment to reverse and revise the decision to shut down the MNPC.

This is to ensure that these critical skills and competency invested and built over many years are not lost and will not put Malaysia at a disadvantage especially in nuclear politics and in particular if further oil shocks and energy crises require Malaysia to plan for nuclear power.