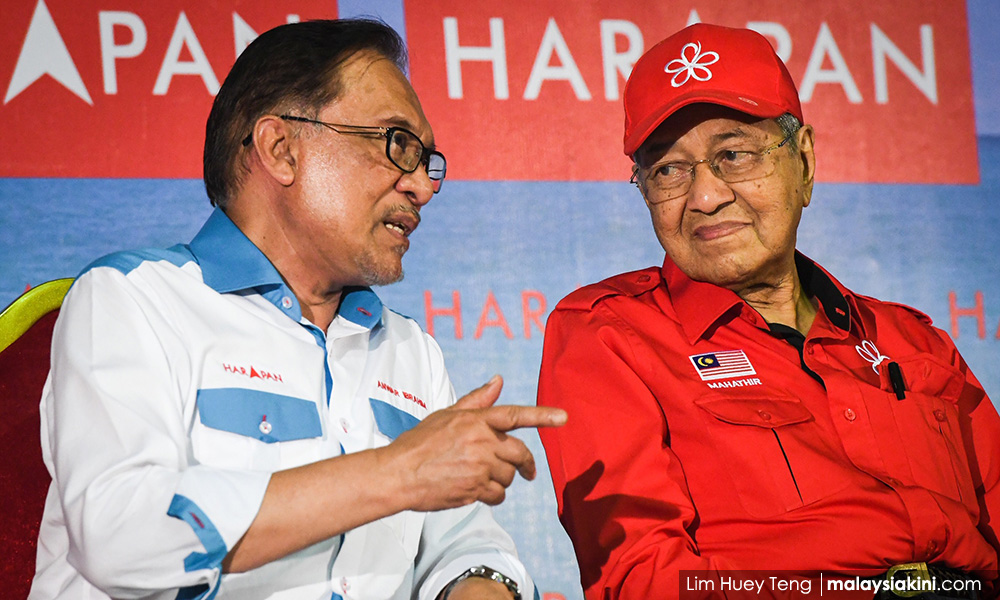 LETTER | Mahathir’s induced dilemma can be self-destructive for Harapan

LETTER | Dr Mahathir Mohamad has brought about a crisis in Pakatan Harapan which could lead to the break-up of the party. It is a total waste of time and effort as the Yang di-Pertuan Agong had categorically stated in his recent Parliament opening address that he is against any political turbulence that could destabilise the country that is facing a socio-economic crisis due to the Covid-19 pandemic.

Mahathir knows full well that he will not be able to be the prime minister again but is stubbornly taking the gamble and it is going to cost Harapan hugely and it could lead to the breakup of the coalition.

Now he has introduced Shafie Apdal and his son Mukhriz into the complicated equation. The DAP and Amanah have also been taken for a ride by Mahathir. Both the parties know very well that Anwar Ibrahim will not be deceived for the second or third time.

Mahathir’s ultimate plan could be to break up Harapan which he feels to be a long-term threat to the Malay supremacy. Mahathir desperately wants to get back in power in order to help his cronies and friends to whom he may have made promises.

Since Muhyiddin Yassin out-witted him abruptly and unexpectedly, he has a lot of loose ends to tie and that is one of the reasons to become the prime minister again. After the promised six months, he may say his business is still unfinished and he needs more time, once again to deprive Anwar of the PM post.

There is also the risk that the crisis might trigger a snap election which will catch Harapan unprepared and cause it to lose badly. As it is, the Umno-PAS combination looms large and the next election could bring a strong BN government.

Mahathir’s influence with the rural Malays has long gone and the Umno-PAS coalition could wipe out any of his influence in the Malay heartland.

It is time the MPs in Harapan put their foot down and castigated their leaders. There are another three years to go as per the mandate. Do they want a fresh election and forsake their power for the next three years? A large number of them may not be selected or elected again.

Why can’t the MPs tell their leaders to bide their time and be well prepared for the next general election? If Harapan goes on this ruinous course, even Selangor could be lost and Harapan will be routed nationwide.

Harapan needs to understand that the Malay majority are fully backing the PN. The Malay community is relieved that they got back their Malay power and privileges, temporally lost to Harapan.

The Chinese and Indians are also giving up on Harapan. Only the hardcore Chinese who strongly feel that there is a need for a strong opposition might still vote for DAP. Amanah will be eclipsed in GE15. PKR could be the biggest loser. Multi-racial constituencies where Harapan won in the last election are no longer safe mainly due to the poor performance by Harapan while in government.

For the last 21 months, Harapan had completely disregarded their Election Manifesto. Indians are leaving Harapan in droves as they don’t see any future despite the party’s lofty aims and objectives. They may not want to go back to the MIC but could nevertheless vote for the BN in the next election considering that bread and butter issues will be prominent in GE15.

Those who voted for Harapan are shocked and angry in the way the “Malaysian Spring” ended so abruptly due to bickering of the Harapan leaders themselves. If Anwar agrees to Mahathir’s proposal to support him as the PM then there could be a mass exodus of MPs and members from the PKR. This could be one of the reasons why he is hesitating so much as defections are the norm nowadays.

It is time for Mahathir to bid farewell to politics and go for a happy-ever-after-retirement. He needs to be given a grand send-off considering that, despite shortcomings, he has brought much progress for the country. He can only create more trouble and controversy now if he is going to be active in politics and dent his image further.

Mahathir needs to be reminded that Muhyiddin, as a friend, despite differences, will not act against him.

This may not be the case of a victorious BN government in GE15 who may be vengeful against Mahathir and investigate a lot of cases pertaining to him and also his sons. He may have to go through the same process and ordeal that Najib went through after GE15. Is it necessary for him to invite trouble?

Based on the last three months of PN power despite the controversial GLC appointments, the country has done well especially in managing the Covid-19 pandemic and becoming the best five in the world.

The various economic stimulus packages are sure to revive the slowdown better at least in the short term. With such a good record it will be difficult to beat the BN in the next election by a divided Harapan.