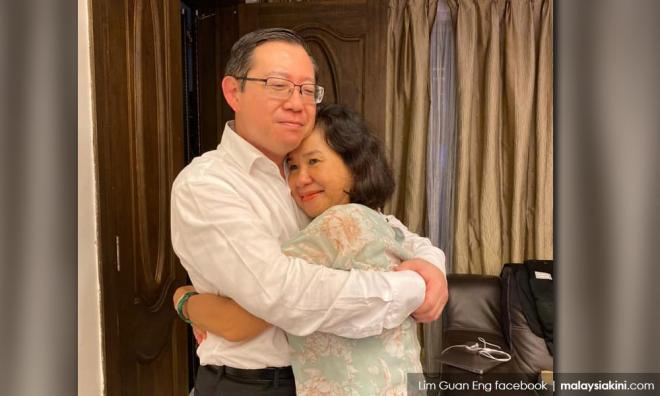 COMMENT | Is anyone safe from the tentacles of vengeful politicians?

COMMENT | Has politics sunk so low that even a politician's wife is no longer 'off-limits' and safe from political persecution?

It is known that even the Mafia and gangsters have a code of conduct and 'there is honour among thieves' but today some politicians have no morals and they seize and retain power at all costs.

Politics is the chosen pathway for people with criminal intent because an institutionalised criminal cartel running the government is hard to pin down.

They hide behind the appearance of legitimacy. They make use of the people for their secret, selfish agenda. They raise their hands that are tainted with corruption. Their God is Mammon - Money.

At least some people unashamedly pray to the God of Prosperity, unlike the hypocrites who hide behind a fake piety when they love and worship the things of the world - the lust of the eyes, the lust of the flesh and the pride of life.

For most of us, all we ask is good, decent politicians, regardless of their race, religion or rank to deliver basic honest governance. But that is not happening.

Defrauding the people, robbing them blind, mesmerising the gullible and leading them astray are what they do without any conscience.

Woe to the nation that exalts the dishonest and accuses the innocent. They will leave their descendants a legacy of suffering long after they are no more and the money has turned to dust.

Why is Singapore a success story and Malaysia and some other countries in the region still struggling with the most basic of governance - integrity?

From Dr Mahathir Mohamad's reneging of the Pakatan Harapan manifesto to his betrayal the country reeks of a stench of moral depravity more noxious than the vape fumes of the arrogant smoker who defiled parliament.

In fact, is anyone safe from the tentacles of vengeful politicians? Who is safe from those who prey on whistleblowing migrant workers, independent media and political opponents?

You don't have to spell out who they are because by their deeds you know them.

Their win by hook-or-crook tactic is tiresome and the cure for the curse of unrighteous politics is to kick them out of office. It has been done before and it will be done again.

The politics of vendetta

The Covid-19 pandemic has robbed people of their freedom, but it is political persecution that is the more pervasive, pernicious and permanent threat.

A good government exists for good not evil. It will not victimise honest citizens and media that communicate the truth. It was not long ago a bad government was removed from office by the people's mandate.

The Malaysian dream has turned into a nightmare. The hope of the nation for good governance has become a chimera - a false hope, at least for now.

The politics of vendetta, abuse of power, retribution, persecution and politically-induced prosecutions, among other things, are part and parcel of a degraded ongoing political culture.

And what a better way to get back at a political opponent than with some charges in the hope of demoralising, damaging and destroying the victim's good character, if it achieves nothing else.

When will Malaysia see a government of ethical, decent and noble leaders remains the unanswered question.

The closest any government got to it was the only two-year lasting Harapan government which was botched by you-know-who.

Had he honoured the manifesto, the nation would now be in a far better position and not the present predicament of political polarisation, politician-poaching and personal attacks.

The subsequent cobbling together of unholy political alliances, 'frog-hopping' and the subsequent dissolution of a state government elected by the people now see the nation fall into a political sinkhole.

Still, as in GE14, the people will give the good guys the mandate come GE15. But beware the 'Ides of March’, the dirty tricks, and the treacherous assassination of the constitution.

Any similarity in wrongdoing between Guan Eng and his wife Betty Chew and Najib and Rosmah Najib is far-fetched and desperate.

Najib was charged and convicted on strong evidence. Rosmah has much to answer. Najib had used the SRC funds for personal spending. The judge made a strong point that the court could not be hoodwinked by a false defence.

The smoking gun was found in Najib's bank account. In contrast, Guan Eng was charged apparently on presumption and hearsay, as P Gunasegaram wrote in 'Will the charge against Guan Eng stick?' And Chew lived a simple lifestyle and never went on a shopping spree.

Where is the similarity?

Shooting the messengers, silencing the whistleblowers, intimidating and charging those who are innocent are common tactics used. And sadly, we now see the resurgence of such ungodly, unsavoury and unprincipled 'hit-below-the belt' politics.

Like the true compassionate professor Tajuddin Rasdi who led the way with a donation of RM500 to a legal fund for Guan Eng, every Malaysian who opposes political persecution will want to emulate it. Speak with your donation.

Say, 'No' to political persecution.

STEVE OH is an author and composer of the novel and musical ‘Tiger King of the Golden Jungle’. He believes good governance and an engaging civil society are paramount to Malaysia being a unique and successful nation.