When I thought up the title for my first book of columns written for Malaysiakini , I thought I was as ‘Mad about Malaysia’ as could be. 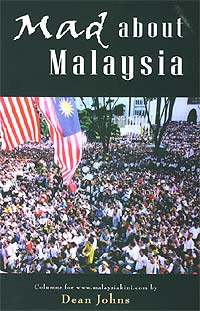 But in the year or so since then, I’ve been surprised to find myself getting even madder. Not, I fondly hope, in the ‘insane’ sense of the word, but in terms of its other conflicting meanings ‘affectionate, admiring’ and ‘angry, outraged’.

So when Pak Chong of SIRD/Gerakbudaya agreed late last year to publish a second volume of my columns and we discussed potential titles for it, ‘Even madder about Malaysia’ seemed like the logical choice.

Some might argue that, as an orang asing and a mat salleh to boot, I’ve got no business getting mad salleh about Malaysia in the first place. But as I explained in the introduction to my first book , my marriage into a Malaysian family at least makes me a Malaysian-in-law.

And I figure that gives me as much right to meddle in Malaysian affairs as his marital kinship with Abdullah Ahmad Badawi entitles Khairy Jamaluddin to act like some kind of trumped-up PM-in-law.

So as mad as I am, in the negative sense, about nepotism in Malaysia, here I am hypocritically invoking it to justify crititicising the government. But at least, as an outsider, I’m not a beneficiary of the New Economic Policy, and therefore not guilty of enriching myself at public expense through Barisan Nasional’s (BN) outrageous system of NEPotism.

The ripping-off of Malaysians, and especially Malay Malaysians, by the very people pretending to have their interests at heart is one of BN’s most maddening characteristics. But what makes me even madder than BN’s network of NEPotism, cronyism, plunder and fraud is the system of secrecy, lies, injustice, repression and racist rabble-rousing that these crooks have created to keep their crimes quiet.

And it makes me even madder still that Abdullah has been promising for almost five years now to reform this disgraceful state of affairs, and delivered absolutely zero. Or perhaps I should make that zzzzzzzzzzzero, considering his popular reputation for sleeping on the job.

But maybe, in my blind rage, I’m not seeing him in his true light. Perhaps he really is, as Zaid Ibrahim said on resigning from his cabinet, “a nice man” whose genuine desire for reform has been thwarted by BN’s so-called “warlords” and its decidedly rank rank-and-file.

But unfortunately “nice” is not enough, especially now that Umno is threatening to replace him in March with the far-from-nice Najib Abdul Razak.

Don’t worry, I’m not about to enlarge and embroider on the subject of Najib, as it might make me so mad as to seem dangerously deranged. And in any case, he has been well and truly exposed and excoriated by writers far more knowledgeable and also more Malaysian than I am, like Raja Petra Kamarudin.

All this brings me to the side of Malaysia I’m even madder about than ever, but in the admiring sense - that burgeoning band of citizens who are selflessly and often dangerously devoting themselves to the salvation of the country they love. 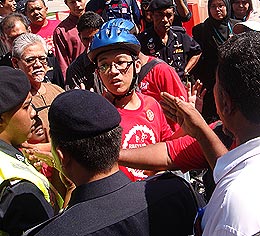 In ever-growing numbers, they’re politicking, protesting, writing, reporting, blogging, marching, walking, cycling, and above all voting at every opportunity for a Malaysia for all Malaysians.

A Malaysia in which every Malaysian, of every race, religion, gender, age, condition, class and status enjoys equal opportunity, equal access to and protection under the law, equality of quality education, an equal vote in free and fair elections, and the right to be fully informed by free media.

In short, the madder with anger I get about what - and who- is wrong with Malaysia, the madder with affection and admiration I feel about my family, friends, colleagues and all those millions of other like-minded Malaysians who are determined, dedicated and hopefully destined to succeed in making things right.

In the forefront of this movement, of course, are some political figures I greatly admire in many ways, including Lim Kit Siang, Karpal Singh and, with due respect to my old friend K Temoc’s opinion of him, Anwar Ibrahim.

But by nature more a supporter of principles than personalities, I’m far more comfortable in the role of non-partisan if not entirely impartial observer, commentator or critic. In other words, I’m not a joiner, I’m a journalist. And as such, I consider myself honoured to be accepted as a columnist by the only media in contemporary Malaysia that engages in genuine journalism, Malaysiakini .

Of course there are a great many bloggers or so-called ‘citizen journalists’ in Malaysia who are clearly the genuine article too. None more so than the guy who generously agreed to my request that he write a foreword for my new book, Antares of magickriver.blogspot.com

I’ve never met Antares in person, but from afar I’ve come to admire his talent and his spirit and to feel that he’s something of a soulmate. We’re both reformed advertising copywriters, for example, and also fellow Capricornians. 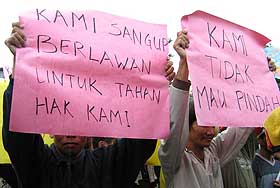 Most importantly, though, we’re on the same mission as our thousands of brothers and sisters in arms at Malaysiakini and in the blogosphere: to foster truth, justice, transparency and fair play in Malaysia in the face of determined efforts by BN and its ‘mainstream’ media to sustain the disgraceful status quo.

To judge by BN’s customary vote-buying and scare-mongering in the current Kuala Terengganu by-election, more and more of us are going to have to get even madder about Malaysia before we achieve our goals.

And in that regard, when my new book sees the light of day in the next couple of weeks or so, I hope it’ll be of some small help.