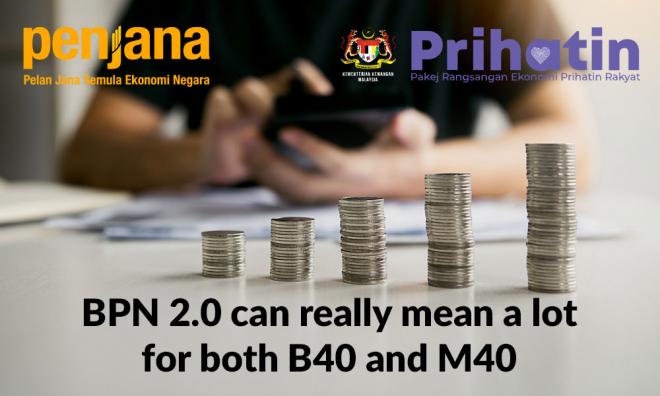 The Bantuan Prihatin Nasional 2.0 (BPN 2.0) through the Prihatin Supplementary Initiative Package (Kita Prihatin) has provided a timely relief for many Malaysians of the B40 and M40 groups who are badly affected by the prolonged Covid-19 pandemic.

Comments gathered by Malaysiakini show that both BPN and BPN 2.0 come in handy as a much-needed help for the rakyat in adjusting their finances in trying times, fighting an invisible virus without an end in sight.

And life has to go on, such are the harsh realities troubling the two most vulnerable groups – B40 and M40.

“I have been having tough times after being laid off as my company couldn’t continue its projects with their clients. And so I had to look for an alternative income through freelance video editing online,” shared Hafiz, who is still trying hard to land a secure employment soonest possible.

Just when the journey ahead seemed bleak, the one-off cash aid of Bantuan Prihatin Nasional (BPN) was announced on 27 March 2020, followed by BPN 2.0 on 23 September 2020.

The RM11 billion BPN was paid out to 10.6 million approved recipients while the RM7 billion BPN 2.0 will be auto-credited into the accounts of practically the same 10.6 million recipients of the B40 and M40 groups, in two phases: October 2020 and January 2021.

How helpful could it be?

“Apart from buying food such as rice and eggs, I use the BPN assistance to pay bills including electricity and the internet,” said Hafiz, a B40 recipient of the single individual category.

Echoing his thoughts, Nurdini, a newly graduated dentist who is an M40 of the single individual category, shared: “I used the BPN money to buy kitchen stuff for my family.”

Likewise, housewife Hema, a B40 household recipient, said: “I find it (BPN assistance) very helpful because I could use it to buy groceries for my family, and pay the bills.”

BPN 2.0 is very much needed

The very essence of BPN 2.0 remains the same as that of BPN – to ease the burden of the B40 and M40 groups, the two most vulnerable groups bearing the economic brunt of the pandemic.

“We are still fighting hard with the virus and we don’t know how soon it will be over. And moreover, our economy is still struggling for recovery. So, any form of help is much appreciated. And of course, BPN 2.0 is such a sensible move to ease the burden of the rakyat,” said Hafiz, who benefited from the first round of the BPN support while looking forward to receiving BPN 2.0,” he added.

He also lauded the moratorium on loan repayment, which aptly provides a temporary relief to people impacted by the pandemic, who find it hard to make ends meet, including himself. The initially 6-month moratorium is now extended for another three months till 31 December 2020 for the B40 group while M40 group can consult their respective banks to restructure their repayments.

Any room for improvement?

Commenting on how can BPN be further enhanced, Hafiz suggested: “The government may consider making it a monthly financial handout, given the fact not many can sustain their livelihoods over a considerably long period with just a one-off assistance.”

Knowing that BPN is a temporary measure, Hafiz believes that paying equal attention to creating jobs that can be done online is another sensible move, considering people can still remain productive to the economy by working from home in the middle of the pandemic.

“This is probably a good time for our government to seriously look into empowering the gig economy,” he hinted.