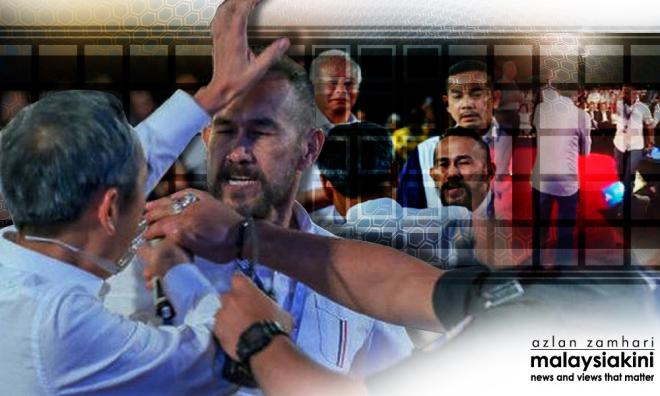 What drove Mat Over ... over the edge?

The slapping incident is probably going to be something much talked and written about in the next few days. It is not just because it something quite sensational (it’s between a semi-famous actor and a factory-line film producer after all!), but also quite apt in context.

It began when film producer David Teo was given the microphone to ask a question to Prime Minister Najib Abdul Razak, who was having a Transformasi Nasional 20150 (TN50) town hall meet with members of the Malaysian entertainment industry.

Before proceeding to his question, Teo criticised the moderator, actor Rosyam Nor, for only selecting those at the front of the stage rather than paying attention to the crowd all around.

Then, right as he was about to begin his question by reciting a poem, actor Sulaiman Yassin (aka Mat Over), walked from the side of the stage and attempted to give Teo a slap, which landed on the producer’s arm.

A struggle ensued as Teo retaliated by trying to kick Sulaiman. Security personnel immediately separated the two men. Rosyam calmed the crowd down and the town hall continued as usual. It was reported that the duo eventually shook hands in front of the prime minister on stage.

News reports also said that Sulaiman claimed that it was just a gimmick and part of the show, but he also said that he did not regret assaulting Teo because he felt that he needed to teach the producer a lesson for not displaying any manners.

Teo, on the other hand, said that he was shocked at what had happened and that he did not know Sulaiman personally. But he considered the issue settled and will not be taking any further action. The prime minister was calm and silent throughout the incident.

Now here’s the deal. I may not enjoy the films produced by Teo and his film production company, Metrowealth Pictures. But I do not think he should be physically assaulted for whatever reason, and especially not for being verbally critical at a town hall dialogue.

A dialogue session is for people to talk, discuss, debate, argue and, yes, criticise, in a civil manner. It is supposed to be an open and safe platform where people should feel confident to voice their thoughts and opinions.

Nobody has the right to violently hit somebody just because he does not agree with that person. And for Sulaiman to say that he felt that he needed to teach Teo some manners by slapping him is simply wrong on every single level.

If you feel so strongly about a certain matter, then put up your hand, ask for the microphone and in this case, say your piece against Teo. That is the civilised and dignified reaction. Physically assaulting someone for any reason is against the law and plain wrong.

What was worse is the fact that Sulaiman thought that he was acting in the interest of the prime minister. He stated that he felt that he had to do what he did because Teo was being disrespectful to the nation’s leader...