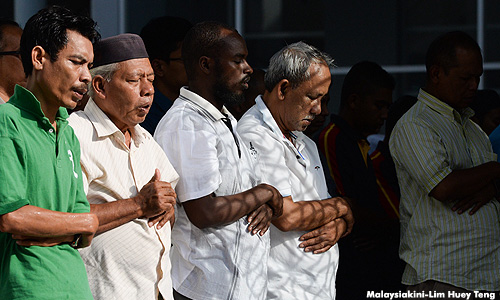 I will break fast with whoever I want

There are many things that happen in Malaysia that would probably make a lot of rational people wonder if Malaysians are an insane bunch. Unfortunately, these incidents happen in the name of Islam when it really isn’t.

Remember when Muslim extremists in the country made a big fuss saying that Malay Muslims are not allowed to wish those of other faiths who were celebrating their festivities? Apparently, it is wrong to wish the Chinese Happy Chinese New Year and the Hindus Happy Deepavali.

And let’s not even get started with the Christians. These extremists would have you believe that if you wish some people Merry Christmas, you would immediately cease being a Muslim and your soul will go straight to hell.

I really couldn’t be bothered with this. I come from mixed parentage and although I am a Muslim, I have relatives who are Chinese and Indians with different faiths - Taoism, Buddhism, Hinduism and Christianity. So I will be wishing all my cousins, uncles and aunties anything I want.

Now, at the start of the fasting month, these extremists have come out to say that it is wrong for non-Muslims and Muslims to break fast together. I have been wracking my brain as to what religious edict provides an explanation on why this is wrong.

As far as I know, eating a meal together isn’t wrong at all. In fact, sitting down together for a meal would be the best opportunity for people to get to know one another, promote understanding and strengthen kinship among them.

What could really go wrong if a non-Muslim joined a Muslim to break fast? Would the non-Muslim’s presence somehow make the Muslim leave his or her faith? Would the food served suddenly become non-halal for the Muslim to eat?

Just last week I broke my fast with a colleague, Ching Yee, who just happens to be a non-Muslim. The food tasted good and the conversation was pleasant. And when time came to break fast, she urged me to eat even before her meal had arrived. Very thoughtful for a non-Muslim.

After the breaking of fast (and some good coffee and ice cream!), we left the restaurant and I was still a Muslim. The next day, and the day after and the day after, I still continued my fasting like the good Muslim that I always try to be.

The ‘non-Muslims can’t join Muslims to break fast’ incident happened after I broke fast with Ching Yee so when I read about it, I showed the article to her. We both found it extremely amusing and equally baffling as to what they thought would happen if a non-Muslim and a Muslim ate together...