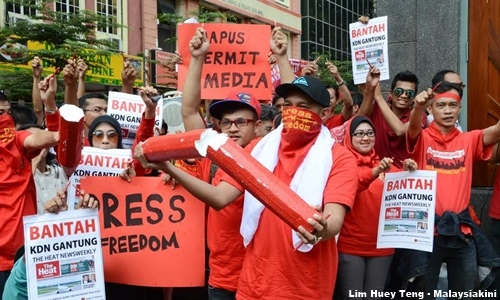 How do we handle media censorship?

COMMENT | The technical definition of media censorship is “the suppression of speech, public communication, or other information that may be considered objectionable, harmful, sensitive, politically incorrect or inconvenient as determined by governments, media outlets, authorities or other groups or institutions”.

Personally, I do not believe in censorship. It is basically a form of control exercised by the select few who are powerful in order to suppress the many who are powerless so that they will remain in power. It means that thoughts, opinions and ideas can always be controlled.

There should not be an authoritative party allowed to dictate what can and cannot be said by the public. This goes against freedom of expression, freedom of speech and freedom of the media. It is against human rights.

If there should be any form of censorship, then it should be in the form of societal control. The power to determine what is said and expressed should be with the public and no one else because the public are the consumers.

Take, for example, the case last year when The Edge published a series of stories on the 1MDB scandal. The government suspended their licence for three months, and even though the court ruled that it was a wrongful suspension, it was too late.

That would be a form of media censorship by the government because they used their powers to take action against a media organisation that they thought had spread information that was non-beneficial to them.

I see this as wrong because the government is playing Big Brother and trying to serve only their interests instead of the public when we all know that journalists are supposed to act as watchdogs and serve the society at large.

Now if it was societal censorship, then members of the public would be the one with the power to decide if such information is wrong or not. If they had disagreed with the stories on 1MDB, then they can choose not to read them or purchase The Edge. Hence, these stories would not gain traction.

Society can also object to the articles and counter argue them. This would come in the form of civilised debates and discourses. This would benefit everyone because it would mean that the issue would be discussed and analysed further for better understanding among the public.

But of course, the abolition of systematic and authoritative censorship and the implementation of societal censorship is something that can only happen in an ideal world. And we live in a world that is far from ideal...