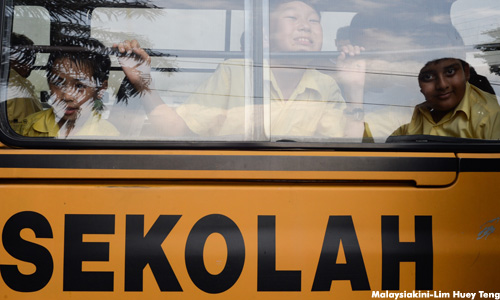 Will my daughter be a racist if she goes to national school?

COMMENT | Abolish and close down fully residential Malay schools, said Youth and Sports Minister Khairy Jamaluddin. This was the headline that dominated the news media early this week and everyone was talking about it.

Khairy said it in the context of the abolition of all vernacular schools and having a single national education system so that it could promote integration and nationalism. Basically, the move is supposed to create a single and united Malaysia.

He had made the comment during a TN50x session with a group of Petronas employees who had said that they wanted all vernacular Chinese and Tamil schools to be abolished. Hence, Khairy said that it would mean all Malay schools need to be shut down as well.

Sure, we can debate whether he had raised the issue during a TN50x session as a political strategy because the general election is coming up. But that is not what my intention is for this week’s column. What I do want to talk about is the lack of integration in our school system.

I actually went to one of these fully residential schools and I have to admit that there really was no opportunity for me to interact with any other racial groups other than Malays. Sure, there were non-Malay students, but the ratio would be like 1 for every 100 Malays.

The school, however, is a good school. It had the best teachers (ironically unlike the student body, the teaching staff was multiracial) and the best infrastructure. Even the students were selected from the very best around the country. So, I would consider myself lucky to have been selected.

However, not being able to interact and build relationships with youth of different races was a big opportunity lost because it meant that we would not have the exposure of different cultures, practices and beliefs. Sure, we learnt about them from our textbooks. But that isn’t real.

I was a bit lucky because I entered the school when I was in Form Four, after being in regular non-residential schools that had more of a mixed student body. I also come from a mixed-race family and I had cousins, uncles and aunties who were non-Malays and non-Muslims.

Most of the other students would spend five years in these schools - from Form One all the way to Form Five. And because these would be considered the most formative years of an individual, it could probably mean a big disadvantage in the outlook for these students as they grow up.

But to be fair, I still keep in touch with most of my school mates and they aren’t exactly racists or intolerant people. For the most parts, they are good people, and we have a WhatsApp group where the discussion on the state of affairs our country is in can be very interesting!

But these are the lucky ones, and also because we grew up several decades ago when racial polarisation wasn’t exactly a big problem as it is now. During that time, we were not constantly bombarded with stories in the media, both news and social media, that were racial in nature.

However, I still wonder if any of my school friends actually have really good and close friends who are of different races. Or is their close circle of friends mainly of the same race, and if they do interact with non-Malays, would they mainly just be acquaintances?

Today, however, is a different matter.

My daughter, who will be turning seven years old next year, recently got accepted into a national primary school...