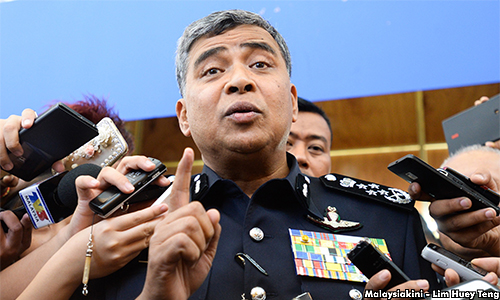 An open letter to IGP on fight against atheists

Firstly, let me declare that I am a non-practising Hindu. I am not one of those who make holy pilgrimages or pray regularly at temples. I offer my prayers and thank the Almighty in a way which I think is correct. No one and nothing can change that – however hard anyone tries. I have visited temples, churches all over the world and even attended Friday prayers in an East London mosque.

There’s nothing to be proud or ashamed of. It was and continues to remain my choice. I have attended religious meetings and talks from supposedly leaders of various faiths. I attended them to widen my knowledge on the teachings of the various books of God, but never at any time did I lose my resolve in my beliefs.

No one knows the number of atheists in the world, let alone in Malaysia. Among us, there could be many who do not believe in the existence of God. There are many, too, who don’t believe that God and religion have exclusive rights to enable one to practise good values and morals. Some are of the belief that they don’t have to go to houses of worship to show their “religiosity” and believe God is in their hearts.

I don’t propagate any religion nor do I run down any faith. For me, to each his or her own. My father was born a Hindu in Jaffna, Sri Lanka, and died a Hindu in Malaysia. One of his brothers was a Catholic priest (there’s a hall in a church in Vattukottai named after him) while another was an Anglican school teacher. There was no animosity among the siblings and I still keep in touch with cousins who are now domiciled all over the globe.

Mr IGP, I don’t mean to lecture you on this matter but your warning not to cause “unease” among Malaysians, particularly Muslims is a non-starter. And your claim that “atheism is not mentioned in the Federal Constitution” borders on absurdity.

It has become a trend now to blame anything and everything said to “confuse” Muslims. Anything that resembles a cross, even dolls and statutes, is deemed to “cause confusion.” Even a well-designed air-well of a building is seen through the blinkered eyes of bird-brained people, which prompted me to suggest that the “plus” and “multiplication” signs be changed! It was stupidity of the highest order and such foolhardiness continues, no thanks to instruments of the state.

I don’t know about you, Mr IGP, but I have many friends with their own cultural and religious upbringings. Some are overtly religious but they have never objected to my views when we have healthy discussions over the narrow-minded minority who thump their chests and claim “my religion is better than yours”. Religion, as I have said several times before, is a personal matter and should be left to the individual to make his or her choice.

As a young reporter, I sat and played gin-rummy with an army general and he termed it as “past time” - not gambling. There were no winners or losers - at one sen a point, all money won or lost was put on the table and spent on late-night suppers...