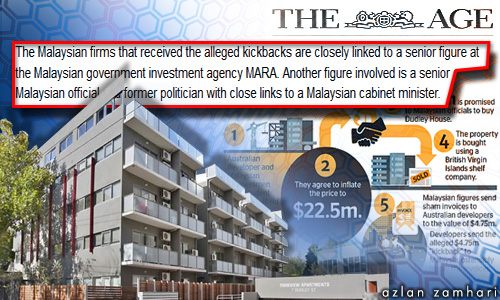 The House at the heart of Mara scandal

COMMENT | He was a former suburban footballer who had helped manage a jail for young offenders before starting his own window and door company in Melbourne. Like all fathers, he doted on his son, Cooper. During the summer break, the young man asked the father for some money to travel for an inter-state football carnival. John Bond had nothing to give – he was broke.

All his money had been used to supply and install windows and doors in a downtown building in Melbourne in 2013. Having worked on the development to almost completion, his company, Trubuilt Properties, did not get paid. Neither did his workers and dozens of other contractors. They were left in the lurch and the owners of the building slipped away to Malaysia.

Bond, having to borrow from his parents to send Cooper for the carnival in Darwin, was a bitter man after his whole business collapsed. With other creditors, he went to the Victorian Supreme Court, and sought the appointment of Andrew Yeo, a senior partner in Pitcher Partners, who assigned the case to a bright young man, Odie Henzel.

Infuriated at Bond’s treatment, Henzel joined the mission to unearth the secrets of the property – Dudley House, which is now become one of the three buildings in what is now known as the “Mara Scandal.”

Three Malaysians –Azizi Yom Ahmad, Abdul Ghani Yusof and Dennis Teen together with Australians, Peter Mills and Chris Dimitriou, had set up a company – Wanissa Properties – to sell Dudley House to Mara for A$17.8 million but inflate the price to A$22.5 million.

Court records show that Henzel discovered an email dated March 2013 in which Mara agreed to buy Dudley House – to be used as a hostel for Malaysian students – and a payment of “AUS$4,785,000 in the form of introduction and consultancy fees” would be wired to a mysterious Singapore shelf company.

Nick McKenzie is an award-winning investigative journalist working for The Age and produces the Four Corners documentary programme for the Australian Broadcasting Corporation.

He caught the whiff as he had already been working on stories of foreign buyers and “dirty money” being used to push up property prices in the state of Victoria where Melbourne is located. McKenzie started his own investigations only to discover a trail of “dirty dealings” by Malaysian parties...