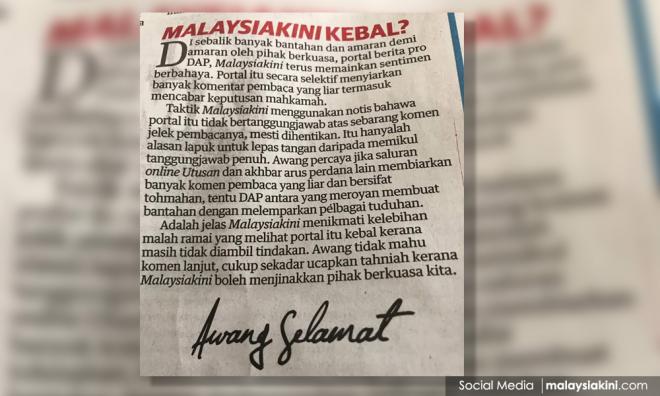 So what if Utusan is anti-DAP?

“We can never be sure that the opinion we are endeavouring to stifle is a false opinion; and if we were sure, stifling it would be an evil still.”

COMMENT | So, Utusan Malaysia has “congratulated” Malaysiakini on its supposed immunity to state sanction because of its readers' comments that are "wild and slanderous." While I happen to think that many of the comments Malaysiakini chooses not to highlight are indeed “wild and slanderous,” this is the natural consequence of free speech.

In defending Malaysiakini during this latest assault on the free press, I wrote – “When simply reporting what was said is considered offensive, obscene or false, the whole charade that this is a democratic country comes tumbling down like a deck of cards. When a journalist is barred from reporting what was said or done, this truly becomes the ‘see no evil and hear no evil’ profession that old-school journalists have been struggling against for years.”

Of course, going after readers' comments is like shooting fish in a barrel. The fact that establishment propagandists often times use racist and slanderous comments of certain anonymous subscribers in their propaganda pieces seems to escape this establishment paper. It apparently also escapes these subscribers who then wonder, why race relations in this country is so bad.

In an environment where competing racial narratives are the norm, readers' comments, either pro-establishment or pro-opposition, are trainwrecks where people express their true feelings under the cloak of anonymity. While rancid racial discussions are sometimes punctuated with nuanced asides, the reality is that people want to express themselves without filters because mainstream politicians and demagogues do so in the mainstream press without filters or sanctions.

Utusan’s claim that Malaysiakini is pro-DAP is about as useful as not acknowledging that Utusan is anti-DAP. By this, I mean that Utusan and Malaysiakini both have their biases which are ultimately irrelevant so long as the state does not favour one over the other. Since the state does favour Utusan, this leaves Malaysiakini as one of the few “independent” – even if allegedly pro-opposition – media outlets in the country.

Do not take my word for it. Here is what Utusan Malaysia ’s deputy chief editor Mohd Zaini Hassan said in a forum organised by Biro Tata Negara: “In our style of writing, we have facts, spin and one more – blatant lies. From the point of psychological warfare, let’s not follow ‘blatant lies’, let’s not write lies. Spin we can; no matter how we spin a certain fact to be biased in our favour, that’s okay.”...