QUESTION TIME | For a simple illustration of how opposition parties/coalitions like PAS and Pakatan Harapan will be decimated if they don’t at least have an electoral pact not to contest against each other, one only has to look at the parliamentary by-election results at Sungai Besar and Kuala Kangsar over a year ago (see graphic). 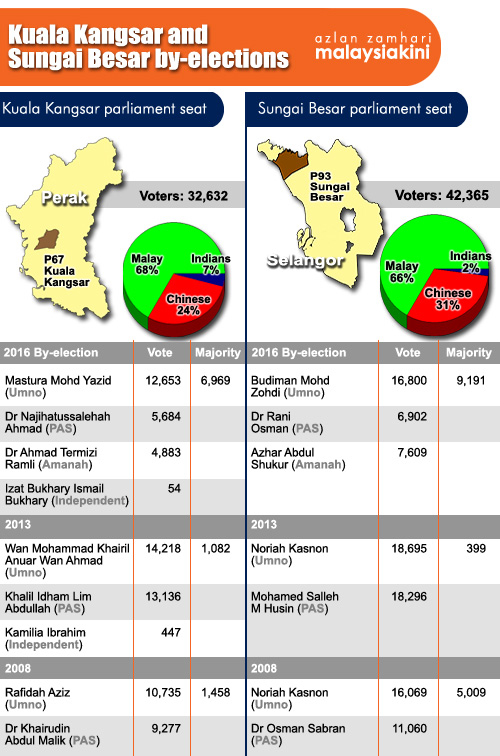 This of course assumes that PAS does not have an electoral pact or alliance with Umno under which they do not contest against each other. If they do, then it is a straight fight between Umno/PAS on one side and Pakatan Harapan the other, ignoring independents.

With PAS and Amanah (the PAS breakaway faction) splitting the Malay votes, Umno easily won by much increased majorities in both places - 6,969 for Kuala Kangsar and 9,191 for Sungai Besar. This is despite former prime minister Dr Mahathir Mohamad’s intense campaigning in both places.

Now total up both Amanah’s and PAS’ totals in each of the constituencies and Umno’s majority falls to 2,086 in Kuala Kangsar and 2,289 in Sungai Besar, which is still significantly higher than the 2013 majorities of 1,082 and just 399 respectively.

To illustrate the almost impossible task of a divided opposition winning these two seats, let us calculate the swing required for this to happen. For this, we assume the swing votes go equally to PAS and Amanah to make calculations easier.

That means three out of 10 of those who voted for Umno previously must now switch their votes to the opposition PAS and Amanah, a kind of swing that is so big even in the current circumstances that no one expects it will happen.

A similar calculation for Sungai Besar requires 9,192 votes to swing to the opposition, in this case Amanah, or 29.4 percent of total votes cast for the three parties in the by-election of 31,311 votes, close to the 30 percent for Kuala Kangsar.

If we use GE13 figures for Kuala Kangsar, when PAS was part of the coalition, a swing vote of less than two percent will do it. And even less than that for Sungai Besar.

Repeat this scenario for all the three-cornered fights in Peninsular Malaysia and the prognosis for the opposition is extremely bad. Why, it may be completely knocked out, let alone win in the next general election...