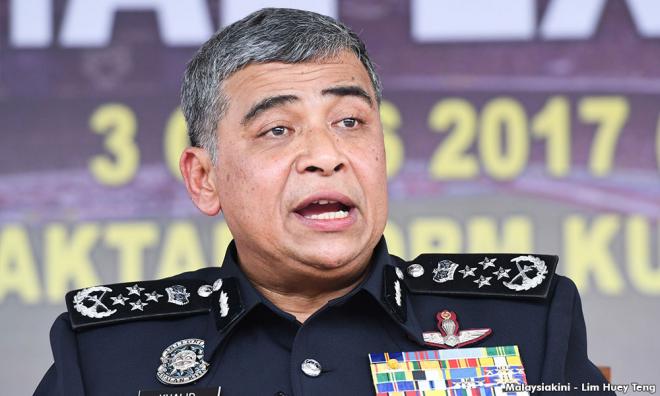 Chief of police to sous chef

It is most amusing to think that the Twitter King, Khalid Abu Bakar, will soon swap his gun for an apron.

Khalid is the inspector-general of police (IGP). When he officially retires tomorrow (Sept 5), the IGP says he will pursue a culinary course at the Malaysian Institute of Baking (MIB) in Petaling Jaya.

Perhaps he will open a mamak stall in Putrajaya after he graduates from MIB?

Will he cook up a storm in his new chosen career? There is a saying that if you cannot stand the heat, you should get out of the kitchen. When he was the top cop, Khalid escaped the controversies surrounding him and kept his job. Fortunately, good cooks are more responsible.

Khalid, the IGP, ruled with an iron fist. He bent the laws as he saw fit. He was not answerable for his crimes.

Ask the mother, Indira Gandhi, whose daughter was kidnapped by her convert husband, Ridhuan Abdullah. Ask the family of A Kugan who died when in police custody when Khalid was the CPO in Selangor.

Ask the parents of teenager Aminulrasyid Amzah, who was killed when police pumped 17 bullets into him for taking a joy ride. Ask Zunar, who was slapped with nine charges of sedition for his tweets.

Khalid bowed to the bigots in government and claimed that the two laws, syariah and civil, conflict. Khalid claimed that Aminulrasyid had parangs stashed in the boot of his car. Khalid claimed that Kugan died from asthma and sudden death. When people like Khalid occupy top jobs, public confidence in the police force falls. The rakyat do not think they can get justice...