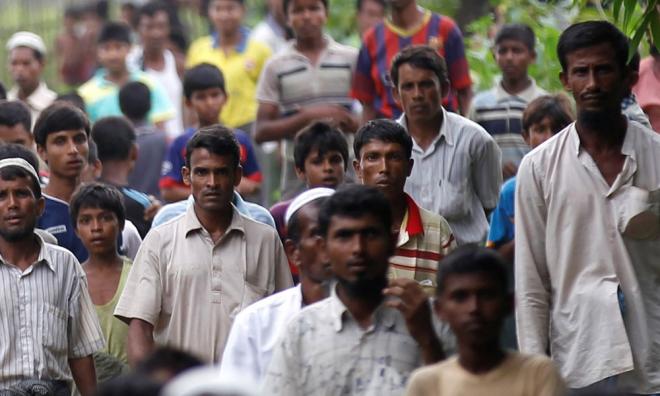 Are the Rohingya terrorists?

Over the past few days, I have received many WhatsApp messages and stumbled across comments on social media about who the Rohingya really are.

One long list of "facts" about the Rohingya that was being shared said: "Rohingya are Bengali who entered Myanmar illegally and killed thousands of native Rakhine people. (The) government gave citizenship and equal rights to thousands of Rohingya. They built hundreds of mosques and thousands of houses in Rakhine State.

"Their population extremely increases every year due to illegal immigrant Rohingya (sic). They bully, rape, torture and kill native Rakhine people every year. In this case, they are systematically attacking (the) Rakhine state and Rakhine people. They killed many in Rakhine, and burnt thousands of Rakhine houses. They made over 30,000 Rakhine people homeless. They were trained by Taliban and Al-Qaeda."

I was shocked. Something about the message didn't quite make sense.

Last year, I was involved in a production of a documentary with RTM about the Rohingya in Malaysia. Our main character was a 12-year-old girl named Rahamad Bi, who fled from her village in Rakhine State with her family back in 2013.

("My village in Rakhine is very beautiful. I have many friends and relatives. But suddenly our village was under attack. All the houses were burnt. Mum said evil people burned them – they did not want us to stay there. Many of my relatives died. Some died on boats while trying to save themselves. Many ran away.

(“My grandmother and grandfather were too old to run, so they hid in the forest. My brother, sister and I followed our mother to Thailand. In Thailand, we hid in the forest because they did not want us there as well. It was a hard time, we had no food. We were always hungry. When we hear the sound of helicopters, we all got scared and prayed.

(“We spent 15 days in the woods. But after that, the boat arrived, and we got on it to come to Malaysia.")

Her story tallied with statements given by her parents, teachers and school principal.

If the Rohingya really are terrorists trained by Al-Qaeda, as they’re accused of being, I wonder why there is any need for them to run away to safety.

While Myanmar State Counsellor Aung San Suu Kyi blames the media for circulating pictures of the massacre in Rakhine State – claiming that they’re taken from elsewhere in the world – I will never forget all the bloody pictures the Rohingya children pasted on the walls of their school.

I asked the school principal why there was a need to surround young children with such gruesome pictures. “We want them to remember what happened to us,” he said.

Having met and spent time with Rahamad and her family, I just could not comprehend accusations that all Rohingya are terrorists who should be chased out of Malaysia for our safety. So I made calls to five Myanmar journalists I knew in Yangon, hoping they would clear the air. Only two accepted my calls, but were kind enough to indulge in a conversation on an issue deemed to be sensitive.

The first journalist, a Muslim living in Yangon, had this to say: “During the persecution by the government, the Rohingya from Rakhine fled their homeland. Some ended up in Pakistan. In Pakistan, they formed a group called Arsa, or the Arakan Rohingya Salvation Army.