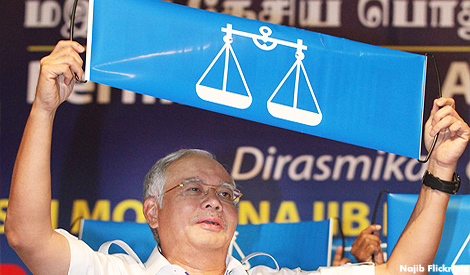 A solemn declaration by citizen Nades

COMMENT | I, R NADESWARAN [I/C NO: 510421-10-****], ordinary resident in Petaling Jaya in the state of Selangor, hereby solemnly and sincerely affirm and say as follows:

I will support the current prime minister (hereafter referred to as PM) and his party – the Barisan Nasional (hereafter referred to as BN) – and urge and encourage right-thinking Malaysians to do the same in the 14th General Election which is due. This is subject to the PM and the BN making concerted efforts to fulfil the following conditions, which in turn will bring about a better and more prosperous Malaysia:

1) The PM, his ministers and the government must stop treating Malaysians as fools by making all kinds of statements which more often than not, appear like a page from Grimm’s Fairy Tales. The continued blabbering of untruths and half-truths will further erode whatever is left of the people’s confidence in the system;

2) The PM and his cabinet must use meritocracy as the basis for all their dealings including recruitment, admissions and promotions. This will ensure efficient and hardworking civil servants are suitably rewarded for their efforts. This will also encourage more talented people to join the government service. Furthermore, we will put an end to the brain drain whereby we have seen hundreds of professionals migrating or seeking jobs overseas;

3) The PM must declare the source of the RM2.6 billion in his personal bank accounts to live up to the people’s expectations of a clean, transparent and accountable leader of the country. Explanations that the money was a donation from an Arab prince has to be substantiated with documents. On the contrary, documents have emerged from the US Department of Justice (DOJ) that large sums of money had been remitted to said personal accounts from an account of British Virgin Islands company Tanore Finance;

4) The PM must confirm or deny that his wife is in possession of/or was the recipient of diamond necklaces and other jewellery worth more than RM120 million. The PM should also confirm or deny he paid RM9.5 million to his solicitor and another RM2 million to a senior armed forces official through his personal account. By maintaining staid silence, Malaysians have to believe what has been reported in the social media;

5) Being honest on these issues will put an end to all kinds of speculation and Malaysians having to rely on social media, which sometimes has the notoriety for publishing fake news or has been over-generous with misinformation.

6) The PM, in his capacity as the head honcho of 1Malaysia Development Bhd (1MDB) must compel its officers to make public all documents related to the loans taken by the company and the purposes for which they were used. Further, those identified in the auditor-general's report and other documents should be prosecuted under the laws of the land;

8) The PM should amend the Malaysian Anti-Corruption Commission Act to include a clause that makes it a criminal offence for all Malaysians (including myself) to have assets or lead a lifestyle not proportionate to their declared income;

9) The PM should set up a “Register of Interests” in Parliament where all MPs are required to declare any donation, payment or any forms of remuneration, wages or commissions and any other form of hospitality they enjoy as honourable members of the House...