On Oct 17 last year, cartoonist Zulkiflee Anwar Ulhaque, better known as Zunar, was barred from boarding a flight to attend a forum at the National University of Singapore. No reason was given for the ban.

The following December, Zunar filed a judicial review to challenge the travel restriction issued against him by the Immigration Department, naming the department’s director-general, the home minister and the Malaysian government as respondents in the application.

Tomorrow, Nov 16, will be the day his case is heard in the High Court in Kuala Lumpur.

I managed to meet up with the famous cartoonist over coffee recently, and we ended up sharing a delightful three-hour conversation.

Zunar comes wearing a T-shirt imprinted with his favourite phrase – “How can I be neutral, even my pen has a stand.”

I ask him what drives him to face down all the hardships he’s encountered, which include the travel ban, book bans, detention, charges and office raids, among others. 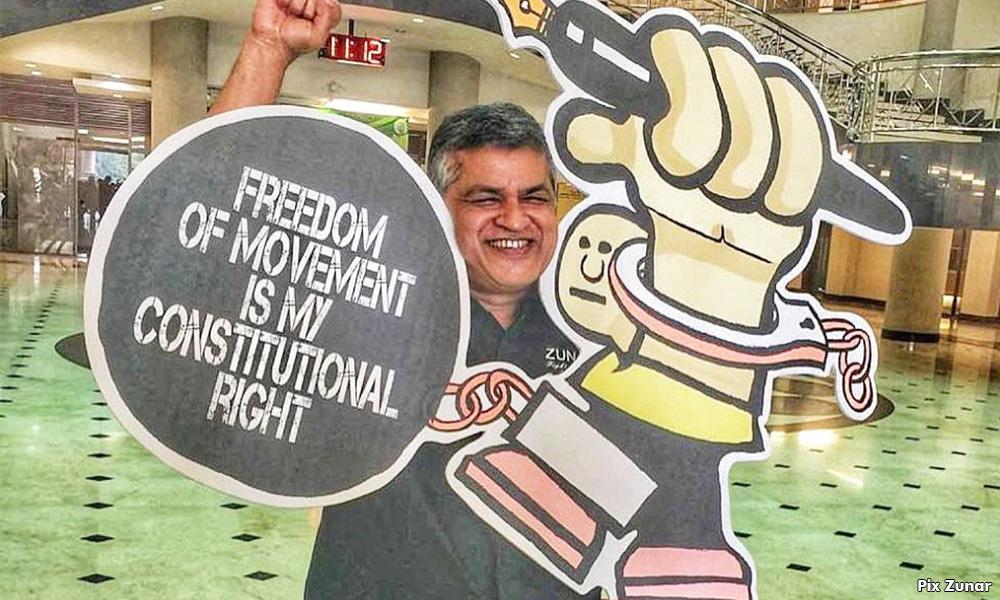 “Which ‘people’ are we talking about here?” I ask.

“You see, taking sides and making a stand is vital in everything we do. As an artist, I adhere to the ethics of Joseph Pulitzer – that the suppressed group of people in a society deserve more support than the rest. That is a responsibility we must shoulder.”

I took a sip of my coffee, making a mental note to Google “Joseph Pulitzer.”

“Did you develop this sense of responsibility over time or have you always been so?”

Zunar smiles. “When I was 17,” he says, “I was the editor for my school magazine.

“Back then, many students used to go on dates at a restaurant near our school in Pendang, Kedah. This restaurant had individual curtains which separated every table, giving its customers much privacy.

“I thought it was inappropriate for students of different genders to be mingling the way they were at that age, so I drew a cartoon for my school magazine based on that, and asked why the discipline teacher was not taking any action.

“So you see, it has always been my style to send messages through my work.”

Intrigued, I ask Zunar how his teachers reacted to this “message” of his.

“Of course they did not like it,” he says, laughing. “I got called in and had to explain myself. Finally, I was forced to withdraw the cartoon from the school magazine.”

“You never learned your lesson, eh?” I tease him. “Now, some four decades later, you are still getting called in and asked to explain yourself.”

“You know Fa, in the early years of my career as a cartoonist, there were many who criticised me. They asked why I tried so hard. They could not understand why I could not just ‘pinch’ and let go.

"If you ask me, why pinch when I can punch!” he exclaims.

But, I ask him, why punch and take the risk of getting detained, when you can get away with a pinch?

Zunar goes quiet for a moment.

“Our mainstream media in Malaysia has failed in shaping people’s minds, Fa,” he says. “Instead of educating the public, the media has become part of the conspiracy to stop people from thinking and to stay uninformed.

“If you watch the TV show ‘Ehwal Islam’, you’d know that they always stress one common view. Even invited panellists are people with same views.

“People with a modern approach on Islam, like ustaz Asri Zainul Abidin, are often not invited to give their take on certain issues.

“That’s how it is in Malaysia. Opportunity is not given to everyone to share their views simply because that’s precisely how the government wants to shape people’s minds.

“For the same reason, we see our mainstream media covering dramas, concerts, sports and other entertainment programmes on TV, but important issues like 1MDB are not given space.” 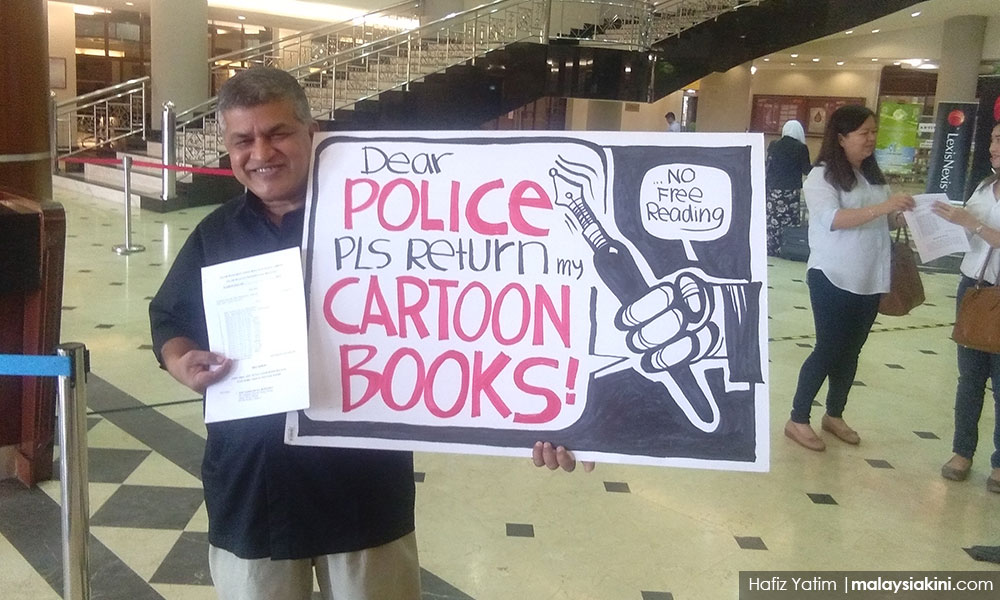 Zunar adds that if the media were allowed to cover, review and analyse vital issues, Malaysians would be encouraged to take part in important discussions pertaining the state of the nation.

“Sadly, we do not have that happening. In Malaysia, we give too much space to cover petty things. PM said this; Hadi said that; Raja Bomoh did this; Ibrahim Ali did that.

“We even sensationalise stories of celebrities dating, getting married, giving birth, getting divorced.

“Everything is either politicised or swept under the rug.”

Zunar gives me an example. “If you go to KL Sentral, there is a big TV that keeps replaying a promo video on the MRT project. It shows the prime minister talking proudly of his accomplishments in bringing development to the country.

“I wonder, why aren’t we hearing from the transport minister or the CEO of KTMB? Why don’t we have them educating the public about the MRT system instead of politicising the project?”

Zunar pauses for a moment to take his daily medication.

Media should encourage sharing of opinion

“I am not complaining that the mainstream media is supporting the government,” he insists. “That is their right.

“But give equal opportunity to those with different views to voice out their thoughts as well. Encourage sharing of opinion. Encourage debates and discussions. Encourage rules to be challenged.

“When people have choices, they can educate themselves. They can compare both sides and choose which to believe in. That is how we shape the people’s minds.

“Unfortunately, this is something our government is unwilling to do,” he laments.

When the government controls information, he explains, society not only remains uninformed but also cannot choose between differing viewpoints. That is when they end up accepting everything thrown at them, instead of fighting for their rights.

“For example, there are many illustrators producing cartoons for Umno. That’s perfectly okay by me. They even have many publications. I have no problem with that either.

“But why am I not given the same right? If people want to see my cartoons, why stop them?” 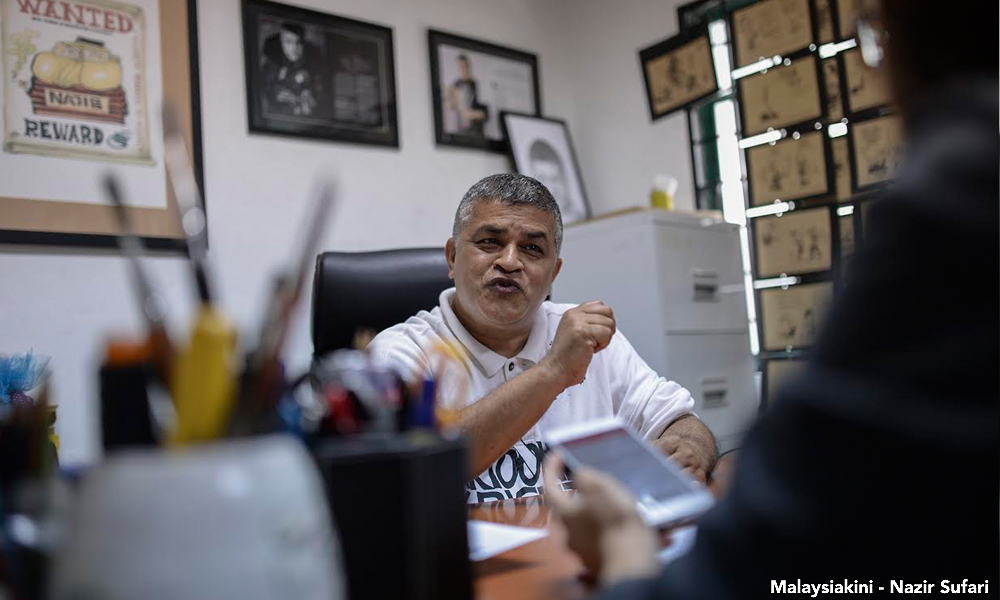 Listening to Zunar, I realise why he chooses to punch and not pinch. Because pinches are not effective enough in bringing about change. And change is what we desperately need.

“You know Fa, a few years ago, I met some Malaysian professionals in Washington. These are people who studied and are living there. You’d be surprised at what they asked me during our Q&A session.”

“What did they ask you?”

“They asked me, ‘What will happen to the Malays if the opposition takes over Putrajaya?’

“These are people who have been living in the United States as minorities, yet are still concerned about their special privileges back home,” he says.

My eyes start to bulge.

“This is what happens when you go through indoctrination – you get your brain polished and you lose the ability to think sensibly. This is what we need to fight, Fa,” he insists.

I force a smile. “This is not going to be an easy fight.”

“It’s not. But it is an important fight. And it’s a fight we all must take part in. That is the only way we can bring about change,” he says.

I was about to bid him farewell and wish him luck with his court case, but Zunar had one last thing to say.

“I blame the government for everything that is wrong in this country. How can you plant lalang and expect paddy to grow?” he asks.

Very well said. Indeed, we should shoulder the responsibility of improving the state of our nation, together.

But if we do not stand side by side in this fight, we might have to endure frustration and disappointment for years to come.

So yeah, why do we keep pinching when we can land full-blown punches?

FA ABDUL is a passionate storyteller, a growing media trainer, an aspiring playwright, a regular director, a struggling producer, a self-acclaimed photographer, an expert Facebooker, a lazy blogger, a part-time queen and a full-time vainpot.