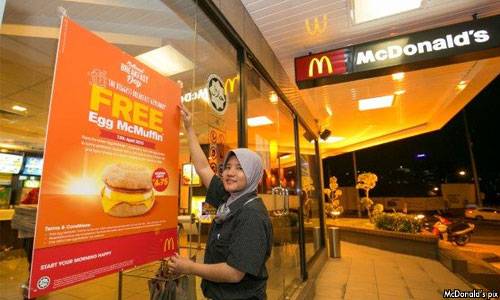 M'sians and their useless fight against Israel

COMMENT | Ignorance always proves to be the downfall of a society and once again, it rears its ugly head in Malaysia, thanks to Malay-Muslims who have no understanding of how things work when it comes to the BDS Movement (boycott, disinvestment and sanctions), which was started in 2005.

The movement was initiated with the objective of targeting Israel and trying to get them to change their Zionist agenda. It was inspired by the boycott that was done against South Africa during the apartheid period. It worked in South Africa and the apartheid government crumbled.

So now, what a whole bunch of Malay-Muslims (comprising over 20 individuals and different groups and organisations) have done is to make claims online that McDonald’s in Malaysia was contributing to Israel and that all Malaysians need to boycott them.

What they didn’t understand is that McDonald’s in Malaysia is run by a company that has no ties with Israel or its government at all. The company, Gerbang Alaf Restaurants Sdn Bhd, actually has a Muslim Malaysian majority shareholder, and a multiracial and multireligious staff.

According to a McDonald’s spokesperson, their employees have also been facing harassment. Hence, the company has now made a police report to protect its employees from the harassment and also against the slanderous claims made by this group of ignorant Malaysians...