Would you be willing to go to jail for something you believe in?

30 months in jail. That is the price Pandan MP Rafizi Ramli and former Public Bank clerk Johari Mohamad are paying for something they believed in.

A bank clerk is very good at putting things in order. One day he finds data that could indicate the money trail of misused public funds. Anxious, he hands it to a politician. His heart stops racing momentarily. The politician investigates further and finds no cows. RM250 million later, still no cows.

Instead, we have 30-month imprisonments for the man and the politician. Isn’t there something wrong? 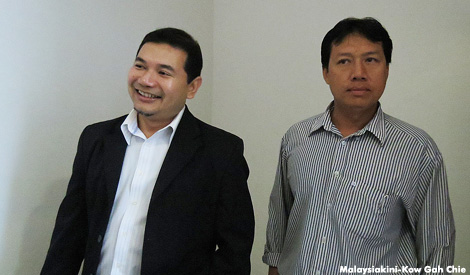 When Rafizi first investigated the National Feedlot Corporation scandal, he wasn’t well known to the public. At that time, both Johari (on right in photo) and Rafizi were simply ordinary citizens who couldn’t stand the smell of alleged corruption and abuse of power.

Injustice is not something only known to academic scholars or moral philosophers; injustice is something universally and timelessly felt – everyone can smell it.

Some sceptics are cynical of Rafizi’s singular devotion to truth. They say that all of this is merely a ploy in his journey to martyrdom.

But we would be damned to think that this is a self-serving journey. One conviction resultant from the struggle for truth is one conviction too many. Prison walls are supposed to house only those who present an imminent threat to society – the “worst of the worst”.

Prisons are placed at the lowest rung of every social hierarchy, since its primary purpose is to punish unacceptable actions and behaviours. It does so by removing your physical mobility, torturing your mental authority and decimating the last of your soulful existence.

If we look at what Rafizi has done since the eve of his political career, and at the insurmountable courage of ordinary people like Johari, they hardly fit the description of being the worst of the worst of our society...