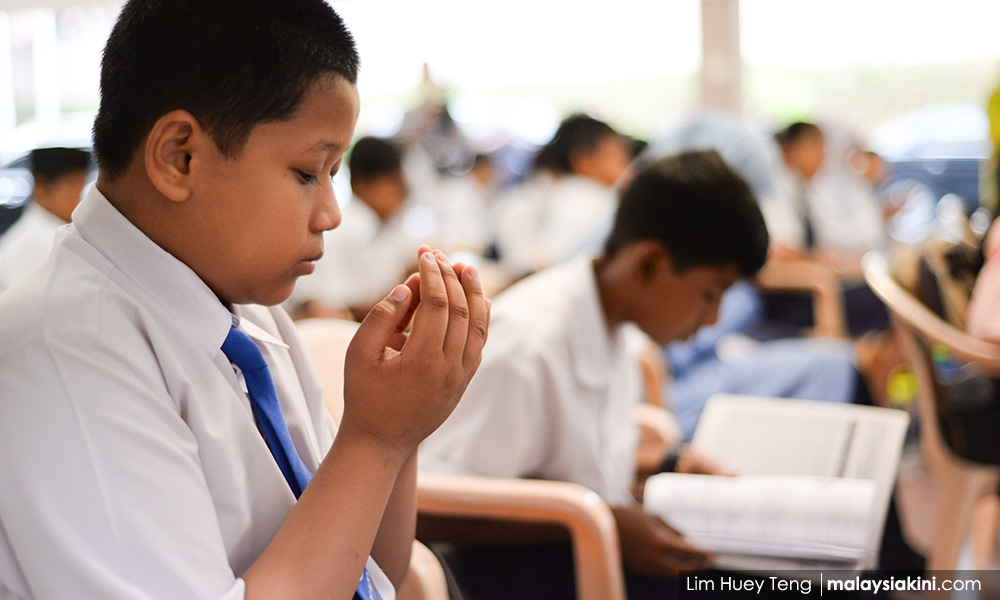 Do we need religion in our education system?

COMMENT | Academic types have offered a plethora of reforms, but I’m a simple man.

“Children must be taught how to think, not what to think.”

COMMENT | Let us test this era of glasnost some claim we are living in. This is a very specific question I am posing. Considering the credentials of our newly minted education minister, I am asking if the education system in our country needs a specific religion not any religion but a specific religion which I have argued has been weaponised in this country and elsewhere.

This is not a provocative question considering how the Pakatan Harapan opposition and now government has contextualised Islam in their narrative. Remember DAP leader Lim Kit Siang has said that DAP supports the Islamisation process if done constitutionally. The "true Muslim meme" as propagated by the Harapan faithful was merely a reaction to the state-sponsored Islam of Umno and the regressive Islam of PAS.

Academic types have offered a plethora of reforms for our education system but I am a simple man. Colonialism left us with a pretty decent education system before religious and racial politics infected the system. So to me, it is going back to basics with modulations that take into account contemporary realities that changing geo-political landscapes and economic markets necessitate.

Islamists in this country love to go about how the Empire left us with a “Christian” education system and what was needed for Malaysia – which they defined solely on a majoritarian view - is Islam and a revision of history texts to fit the narratives of the dominant community and the agendas of the indoctrination of the state.

When people talk of vernacular schools which over the years has become a reaction to the racialisation and Islamisation of our public schools, all I can say is, that a progressive government should cease funding these types of schools. They were part of the barter system when it comes to racial politics anyway. At the same time, the government should also cease funding religious schools, however one defines them. If communities want such schools, it should be allowed with appropriate regulation and on their own dime.

In Malaysia, you can punish people for not being religious with all the fatwas, laws and other restrictions placed on Muslims when it comes to their faith. The syariah legal system, when it comes to the irreligiousness of Muslims, is the most overt form of sanctions but when you have the death penalty for apostasy, the statement by our education minister is even more bizarre.

And do not get me started on non-Muslims. How they practice their faith is limited to what is acceptable to the sensitivities of the Muslim community, hence any claim that there are no sanctions, either legal or communal, when it comes to how religious someone is in this country is total horse manure.

All those pablum from our new education minister are echoes from personalities of the previous administration. Should we buy it simply because it comes from a Harapan official? Unless there are concrete steps to rectify the education system, all these homages to inclusion and racial and religious tolerance is merely components of the Kool-Aid.

When some folks say let us give our new education minister a chance despite what he may have said or done before, that is a coherent argument. After all, a certain segment of the current regime is made up of people who have engaged in racist, bigoted, fascist and misogynistic behaviour before but their sins were washed away when they “saved” Malaysia. Our education minister is not the most egregious offender on that score...