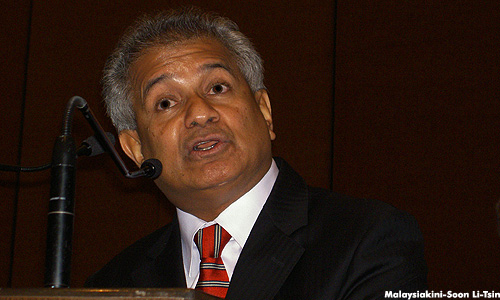 Yes, Tommy Thomas is the AG this country needs

“The fascist elements of the state, whose main aim in life seems to be to protect and serve the interests of the ruling party, must be reminded that Malaysia does not belong to the prime minister.”

COMMENT | Besides being a co-conspirator to the Najib regime, what Mohamed Apandi Ali is really infamous for in my book, (as detailed in The Wall Street Journal) is recommending that caning form part of the punishment for those who violate the Official Secrets Act – “At present, those who violate the law will serve one to seven years in prison. Apandi has proposed that sentence be extended to life, and that caning be administered as well.”

I will not even bother going into the details of the sacked AG malfeasance because it really just stains this article, which is about an appointment that I am cautiously optimistic.

When Tommy Thomas was announced as the Pakatan Harapan choice for the post of AG, the predictable backlash from the ‘bangsa’ and ‘agama’ crowd reverberated through social media. On the other side, there was the predictable rhetoric that a person’s race or religion does not matter.

Both sides do a disservice to this country. When Lim Guan Eng, the current finance minister, blathered on about being a Malaysian as if race did not matter, it was Deputy Prime Minister Wan Azizah Wan Ismail who said, "To have a Chinese finance minister is actually a very good way forward - this is integration of all the races."

Dismantling the “ketuanan Melayu” ideology as the deputy prime minister conceded is a difficult hurdle to overcome and it does Malaysia no good to engage in sophistry when it comes to race relations in this country.

The same thing happened when Tommy Thomas was announced as the only candidate for the AG’s post. It is an extremely big deal that a non-Malay was chosen for the post, which is not to say - like in the case of Guan Eng - that this is merely “tokenism”, as denied by Wan Azizah when a non-Malay was chosen to be the finance minister. Tommy Thomas no doubt meets the necessary requirements but more importantly, although many would choose to ignore for various reasons, this is another reminder that things are slowing change.

Furthermore, whether there is a conflict of interest when it comes to the appointment of Tommy Thomas with his links to the political elite of Harapan is a question only time will answer. Mind you when I say time, I mean a very short time. It would become immediately apparent if Tommy Thomas is biased towards certain personalities, so what we have to do is wait. This being Malaysia, we would not have to wait...