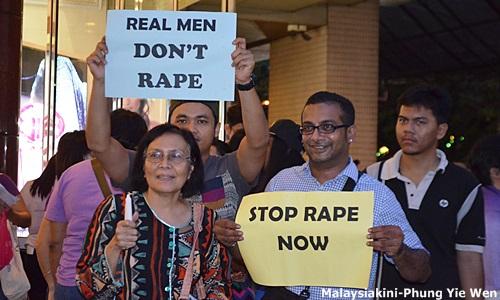 “Unfortunately, as with many sexual crime cases, victims who try to make a report are often not given any support by the front desk officers. This often stems from a lack of understanding and patriarchal beliefs that a wife must submit to her husband.”

COMMENT | Petaling Jaya MP Maria Chin Abdullah worries that Deputy Minister in the Prime Minister’s Department Hanipa Maidin dismissal of the criminalisation of marital rape - because it is difficult to prove - could be “misinterpreted” that the government takes the issue lightly and has no intention of criminalising marital rape.

Here is the thing though, if the government took marital rape seriously, they would not dismiss it on the grounds that it was difficult to prove. I cannot believe that a seasoned activist like Maria Chin, who no doubt has witnessed the Malaysian criminal justice system up close, does not understand that rape in Malaysia – and elsewhere – is difficult to prove.

In Malaysia, it is made worse by the diktats of religious extremists who not only control the discourse but also legislation. And yes, when the government says it has no intention of criminalising marital rape, there is no room for misinterpretation when it comes to the intention of the state.

While Perak amends its laws to make polygamy easier (another goal for team patriarchy, I guess), the federal government is dismissing rape survivors because the crime is difficult to prove, or so they say. And marital rape is rape.

Maria is correct when she points out that the exception under Section 375 of the Penal Code is not legislation that deems marital rape a crime, and this of course was the position of the former Umno regime. Then Minister in the Prime Minister's Department Nancy Shukri stated that - “The provision with regard to Section 375 that intercourse between a legally married couple continues to remain in force and cannot be considered as rape.”

Some of you no doubt would have taken offence at what Hanipa said, but really this is just the narrative of mainstream sexual politics in this country. Besides, Seputeh MP Teresa Kok has said the same thing in 2017 when she was part of a bipartisan committee, Select Committee on the Review of the Penal Code and Criminal Procedure Code.

“How are you going to prove that it is marital rape? This is very difficult to describe and argue in court and that’s why we put it the way it is under 375A, where the jail term can come up to five years. In a way, it covers incidents of violence, including marital rape.”

Which is, of course, horse manure because as Maria pointed out (emphasis mine) - All this means that it is not a crime for a husband to rape a wife unless the husband causes injury when intending to have sexual intercourse.

Think about it this way. This line of reasoning would mean that rape is not a crime unless some sort of violence has been part of the process. Is this what the government is saying...