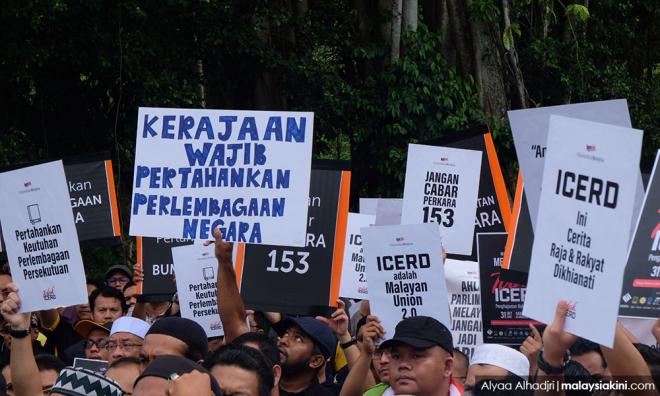 Prove that Malaysia is not racist by signing Icerd

COMMENT | When I was in Standard One during primary school (and this was way back in 1985), I never thought of what my race is. We spoke English at home with heavy smatterings of Bahasa Malaysia, Cantonese and a bit of Bugis. We celebrated Hari Raya, Chinese New Year and the occasional Deepavali and Christmas.

I never equated any of that to a specific race. I just grew up seeing the languages we spoke among my family members as just a form of communication. If not how else were we going to organise our daily lives with each other, right? It was just a very practical function.

The festivities that we celebrated also did not strike me as racial or even religious festivities. It was just great excuses for my family to get together, have fun and enjoy each others’ company. We celebrated it all with much vigour and excitement.

One day in school, several classmates of mine came up to me. It was right after the Chinese New Year and I had been bragging about the number of angpows I had received from my parents, uncles, aunties and grandparents. I wanted to save up the money and get a Thundercats Sword of Omens...

Is the anti-Icerd protest a catalyst to stage riots in the country?
23 Nov 2018
Anti-Icerd drive is about defending Malay ‘privileges’, not rights
23 Nov 2018
Bumiputera have nothing to fear from Icerd
22 Nov 2018
Icerd: Taking a stand against racism but supporting affirmative action
22 Nov 2018