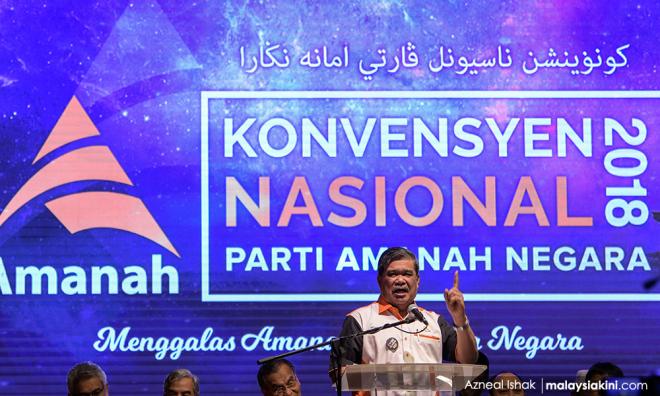 What do we do now? - Bill McKay (The Candidate)

COMMENT | To be honest, I have always been ambivalent about Parti Amanah Negara (Amanah). As a splinter group of PAS, its creation was mired (rightly or wrongly) in the kind of DAP politics despised by the hardcore but not necessarily the Hadi supporting faithful of PAS.

Which is why Mat Sabu (who would make a better minster of tourism, arts and culture then his current Defence Ministry portfolio, which seems beyond his ken) reminding the Amanah faithful that they need Pakatan Harapan because they cannot stand alone, is music to the ears of many in PAS who still bear grudges.

The Amanah AGM has been getting some attention because the usually quaint party has been been expressing some sound and fury. This is to be expected in AGMs of these sorts (coming off a big win) especially from younger delegates.

It is a venting mechanism, which allows the older mainstream power brokers to get on with the business of maintaining power, but presents a veneer of radicalism. This “radicalism” is a good talking point for mainstream parties stuck in a rut of conventional politics, which they do not wish to abandon.

You know what is funny ? Amanah could be the kind of political party that could be effective in this country if it just discovers its cojones.

I would argue that Amanah power brokers should make these issues “official” party policy so that Malaysians – however they identify themselves – would have a better understanding of Amanah’s stance instead of relying on the fact that urban voters consider them a “moderate” Islamic party...