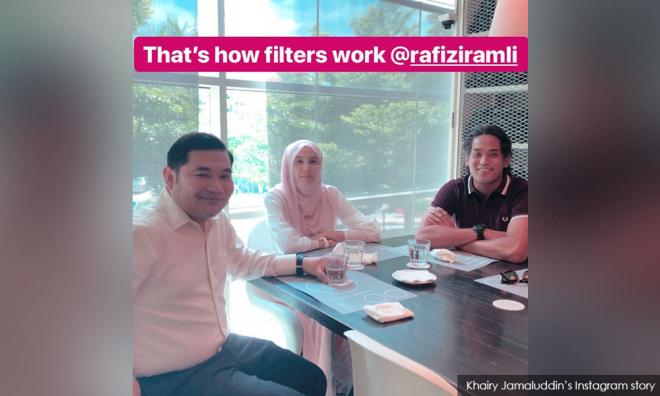 I might know what you did on your last lunch date!

COMMENT | Three people who have always been the symbol of youth, change and reform in Malaysian politics in the past five to 10 years or so have been subject to a lot of attention recently. Yes. I am refering to the golden triage that is Nurul Izzah Anwar, Khairy Jamaluddin and Rafizi Ramli.

Recently, they have been seen having lunch twice now. Many would say that this is just some sensational news that can be brushed off because we need a little bit of gossip drama in politics. It’s just something juicy to talk about. But maybe there is something more there.

We all know how Nurul started. While still a student, her father, then deputy prime minister Anwar Ibrahim was sacked and arrested. By having to fight for her father, she was thrown into politics and eventually became a powerhouse in the opposition.

Khairy was the son-in-law of the country’s fifth prime minister Abdullah Ahmad Badawi. He still is Abdullah’s son-in-law, but the old man is no longer the prime minister. Khairy rose quite fast, of which many people believe is due to him marrying up!

Rafizi came to the fore as a whistle-blower. He was never afraid of digging up dirt on his political rivals who were mainly in the government at the time. So much so that he himself have been charged with exposing confidential information.

The one that actually sticks out among the three is Khairy because he is from Umno and was in the previous government. Nurul and Rafizi are from PKR, which is only now part of the new coalition government ever since the general election last May.

Now, since the May election, it can be said that things have gone a little bit down south for these three individuals. Khairy is no longer a minister and he lost his bid in trying to be the president of Umno in the last party elections.

Rafizi had a guilty verdict in a case that involved him having confidential information and could not defend his parliamentary seat. He also lost in the party elections when he ran for the deputy president post...