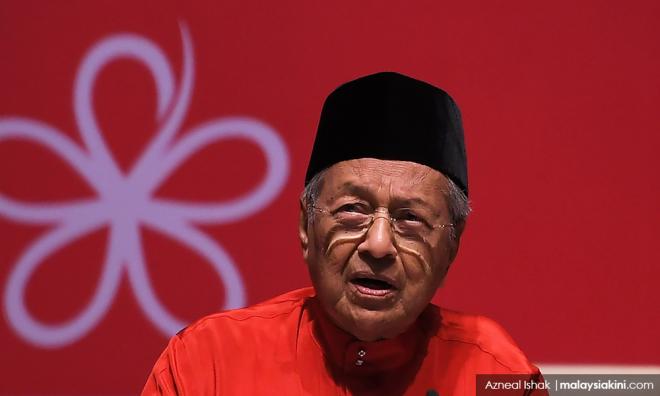 QUESTION TIME | When Prime Minister Dr Mahathir Mohamad sunk low to say that wealth should be distributed equally among races, he indicated plainly that he has no solid plan to increase incomes and alleviate poverty for all Malays and Malaysians. Jaded and faded, his priorities are elsewhere.

During his time as prime minister previously for a very long 22 years from 1981 to 2003 out of 46 years since independence at that time - nearly half the period of independence - he had plenty of opportunities but squandered them.

He did not care for the common Malay but was instead more focused on creating Malay billionaires overnight through the awarding of lucrative operations handled by the government or government companies previously, such as roads, independent power producers, telecommunications operators and others.

He depressed labour wages by bringing in millions of workers from Indonesia, and subsequently, Bangladesh and the Philippines to alter the religious balance in Sabah. A significant number of them became Malaysian citizens over the years, altering the overall racial and religious balance in the country itself.

By doing that he betrayed his own race, many of whom were workers and small entrepreneurs whose incomes were constrained by imported labour. Even now, Mahathir has not shown a great willingness to increase minimum wages, which will help many poor Malays and bumiputeras increase their incomes.

As Mahathir himself well knows, distribution is not an easy thing. Stakes held by others cannot be simply distributed but they have to be sold, even if it is at depressed prices as it was under the New Economic Policy or NEP, when companies wanted to get listed.

There are not enough Malays rich enough to buy these stakes, but many of them in the Mahathir era and earlier, especially the connected elite, became rich by purchasing the 30 percent stakes to bumiputeras that had to be divested upon listing by taking bank loans.

By simply flipping the stakes on the market at a higher price after they were listed, they pocketed the difference and became instant millionaires.

It was Mahathir’s brother-in-law - the straight, honest and capable Ismail Ali - who was the architect behind the setting up of Permodalan Nasional Bhd or PNB to hold in trust for bumiputera stakes in major companies. PNB now has funds of some RM280 billion and has been enormously successful in this respect.

But Mahathir, with advice from Daim Zainuddin who became his finance minister, still cultivated selected bumiputera leaders, many of them Daim’s cronies, and gave them plum deals. A slew of them who were terribly over-leveraged got into trouble during the 1997/98 financial crisis...