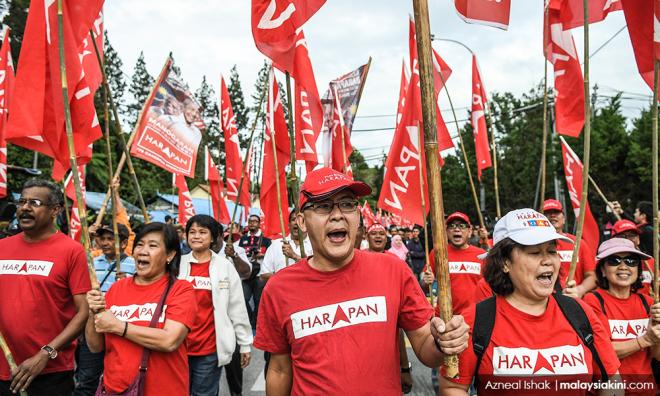 Are you disappointed in Harapan?

“Disappointment is a sort of bankruptcy – the bankruptcy of a soul that expends too much in hope and expectation.”

COMMENT | Academic Bridget Welsh, as usual, made an interesting point in a recent conference about the disappointment some Pakatan Harapan supporters feel towards this new regime. She said: “Unlike US President Donald Trump who had responded to his political base and hold on to power, in Malaysia we don’t see that.”

Just before the election, I made my case as to why I thought Dr Mahathir Mohamad’s Harapan would get the ‘Trump vote’ instead of Najib Abdul Razak’s BN, which went all out, in the words of then-deputy prime minister Ahmad Zahid Hamidi, to emulate the US president.

“What Zahid should be mindful of is that in these uncertain economic times, Mahathir looks more like someone who can take control of the situation than the current Umno poohbah and his coterie who are mired in all sorts of scandals. This is what Trump promised his supporters and what got him votes from the most unlikely of demographics.”

The reality is that the people most disappointed with the current regime are (mostly) non-Malays who believed that Harapan would be the change this country needed, and not necessarily what the majority wanted.

Now, of course, some people would say that removing Najib was the main goal – and I get that – but there would not be this sense of despondency if they didn’t actually hope that Harapan would save Malaysia.

If removing Najib was all that was important, then these people would be of the same intent as Mahathir – who, in the beginning at least, publicly admitted that removing Najib was the only thing he shared with the then-opposition – and not be clamouring for reforms and nodding their heads with everything he is saying now.

Reform almost seems like a fait accompli. The propaganda was so thick that contrarian voices were shouted down when they pointed out discrepancies in the way Harapan political operatives talked and the polices they came up with. Everything was viewed ahistorically.

It still is. This is why the prime minister warned that we should not forget our history, that minorities could be perceived as an economic threat to the majority, and make the claim that wealth distribution should be done “fairly” – all in the same breath. My political stance has always been that wealth redistribution and egalitarian principles are mutually exclusive, but this is not the place for that conversation.

When Harapan is pushed to actually fulfil their campaign promises to implement the agenda which may actually save Malaysia, they are warned not to spook the Malays by rabid partisans. These partisans have no problem highlighting the systemic dysfunction, but are too concerned that Harapan would lose the next election or stir up the far right in this country to do anything about it. BN, at the apogee of its power, promulgated the same idea...