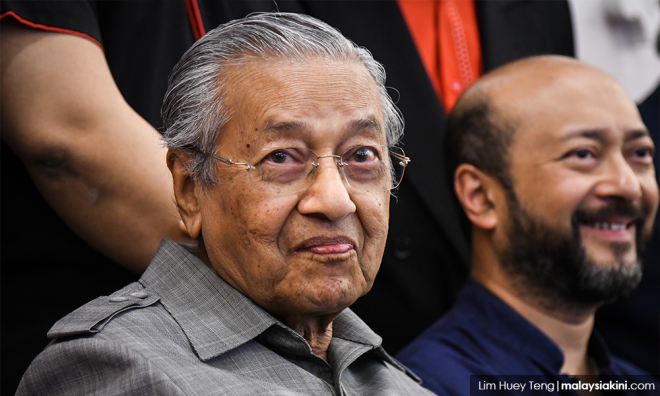 COMMENT | One question that kept cropping up before May 9, was, could Pakatan Harapan control Dr Mahathir Mohamad if the coalition won the election? Harapan political operatives assured their base and fence- sitters that there were mechanisms in place that would constrain the former prime minister who many claimed was the architect of the kleptocracy that then prime minister Najib Abdul Razak was leading.

Very quickly after the election, it becomes obvious that Mahathir was still playing by his own rules and all those voices pre-election were muted, embroiled in their own battles of grappling with a bureaucracy that was attempting to find its new master.

Most people view Mahathir’s backtracking on accepting Umno members as some sort of betrayal of Harapan and the people who voted for them. But is it really a betrayal? I was not the only one writing of how the fall of Umno would see an infusion of Umno talent into Bersatu. I remember writing of how that this was the game plan, that Bersatu was the lifeboat for Umno members who wanted to jump ship.

James Chin’s 2017 article on why Mahathir is at the centre of Malaysia’s opposition power play is required reading for anyone who thinks that Mahathir’s moves are out of the ordinary. In it, he not only describes the political machinations of someone I consider the shrewdest political operator in modern Malaysian history but also clearly articulates the reasons why Mahathir joined the then opposition.

In numerous articles, I reminded readers that we should not be naive when it comes to backing Mahathir. As Chin rightly pointed out, the reason Mahathir joined the opposition was not for reform but to oust Najib. The central reason why this was feasible because it involved the Malay political establishment which is the only power structure which matters.

Two points, Chin made (and in all modesty which I have made numerous times also) are worth revising.

1. “The other two pillars of the Malay establishment, the civil service and the security forces, would also be much more likely to accept a non-BN government with Mahathir than they would one without. The Malay establishment has a deep fear of the DAP who many view as Chinese chauvinists who would destroy Ketuanan Melayu (Malay supremacy) and Ketuanan Islam (Islam supremacy) should they win government. With Mahathir at the helm of Harapan, these fears are minimised.”

2. “In summary, if the defenders of the Malay establishment are forced to hand over power to someone from outside the Umno, should it lose the upcoming election, there is no better person than Mahathir. For them, Mahathir simply represents an alternative Ketuanan Melayu leadership, rather than real political reforms.”

While PAS and Umno may attempt to continue the narrative that the “Chinese DAP" is controlling Mahathir, what they are really worried about is that the old maverick is slowly consolidating Bersatu’s power in the civil service and the security apparatus.

Some people see these Umno defectors as merely corrupt politicians jumping ship but it is deeper than that. What is really happening is people with influence in the Malay establishment and people who actually have an understanding of how the bureaucracy works – corruption and all – pledging allegiance to Bersatu to carry on "business as usual" to sustain a dominant Malay power structure, which Bersatu aims to be.

Bersatu, which is slowly replacing Umno as the right-wing Malay party capable of maintaining the system of patronage and privilege of the Malay community, is not something that happened overnight. It was the game plan from the start and if you believe that Harapan political operatives did not know this, then they are incompetent or are just plain lying to their base. Or maybe the base was drunk on the Kool-Aid.

Nowhere is this game plan more evident than in the recent allegations by Court of Appeal judge Hamid Sultan Abu Backer that the Harapan win rattled senior members of the judiciary (for a whole minute) but then they “extremely happy” when members of the old regime were elevated. "The talk among the judicial members was that they were appointed because of the influence of an ex-minister who they served earlier.”...