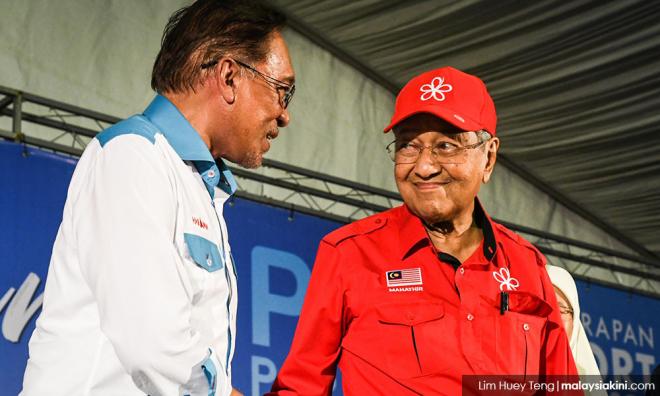 COMMENT | I once observed that it was a managerial tactic to offer “two years” as a convenient timeframe to put off a decision that it didn’t really want to make.

“How long will I be in Ipoh?” asked a friend who was being transferred out of Petaling Jaya. “Two years” she was told. A year-and-a-half later she inquired again, and “two years” was the ubiquitous reply. She resigned soon after the original two-year deadline came and went.

This time around, while the principle is the same, the “two years” affects all of us. It’s a by-product of an unwieldy election agreement by people who have since repeatedly told us that they never expected to win. And that’s probably why they never agreed on a timeframe when the four Pakatan Harapan parties inked the deal on Jan 6, 2018. The order of succession yes, the timing no.

The “two years” figure cropped up quickly after May 9, but I don’t recall it being in the mix when PKR and DAP loyalists were being persuaded to rally behind Dr Mahathir Mohamad.

It was just a convenience, and only became part of the equation when the “new” prime minister asked for two years to fix the problems he had inherited. But the more machinations that unfold, the more the “two years” looks like a ploy to buy time.

To be fair, our prime minister is going to be 94 in July and surely even he can’t envisage himself as a long-term solution. But there are cronies around him urging him to stay. Do we think that the likes of Daim Zainuddin (photo), Taib Mahmud, Kadir Jasin and Co, are keen on a reinvented reformist Malaysia helmed by Anwar Ibrahim and his party?

Would some of them fear a wider investigation into corruption during Mahathir’s first run? Yes, I am aware that Anwar himself would be implicated... but there is nothing to prevent selective investigations of the variety we are already witnessing.

In the meantime, ordinary Malaysians are getting impatient on issues of economy and justice. We want to see some results. Najib and Ahmad Zahid Hamidi are not behind bars. Jho Low is on the run. The missing pastor is still missing. Custodial death inquiries still return the same sort of results. From Teoh Beng Hock to Altantuya Shaariibuu to the National Feedlot Corporation (NFC), all sort of probes are ongoing, but nothing has been delivered yet.

We have so many pending or impending Royal Commissions of Inquiry (RCIs) that it’s only a matter of time before we order an RCI into the number of RCIs!

As for the economy, yes we are relieved that a kleptocracy has fallen. But it was only at one level and our business model has corruption woven into it at so many levels. We need to see some tangible improvements that affect the common man. And I mean the middle 40 percent income group, as well as the bottom 40.

"Enough with street politics. Enough with backroom politics" is the cry. Malaysians have become so used to reactive politics and an administration running from one by-election to the next like a pet seeking constant approval. We are in danger of becoming apathetic and disillusioned again, and slowly surrendering the gains of the "revolution by ballot box" of May 9.

It’s disheartening to see an elected administration worrying about the feelings of right-wing Malays who didn’t support the government in the first place. How about the voice of the progressives of all races? Don’t they mean more? The actual day-to-day governing is important.

Right now, it should be about administration, not campaigning. The mandate is still a strong one. This government needs to have clarity of vision and the guys to make difficult decisions.

It’s high time leaders like Mahathir, Abdul Hadi Awang, Lim Kit Siang, Najib and indeed Anwar himself look to a future that exists beyond them. They all have been public figures for at least 40 years and we need fresh blood, surely.

Anwar will be nearly 73 years old when the two-year deadline is up, and he can hardly be held up as a leader for the long-term.

Yet, at the same time, the Anwar premiership is a must, partly because the succession agreement was a promise to the people of Malaysia that cannot be broken. And partly because the prime minister’s post should go to a Malay-led multi-racial party, which is the only sustainable blueprint for the future.

I regret to say that many Malaysians have a poor sense of analysis and are easily distracted by smoke screens and shadow plays.

That’s why people were able to whip up more anger over Anwar’s move to contest in Port Dickson than against Mahathir for accepting former Umno MPs into Bersatu, even though the former’s action was in keeping with the succession plan, and the latter’s does not appear to be so.

The roadmaps and agreements that brought us a historic new beginning must be adhered to, not discarded like soiled diapers.