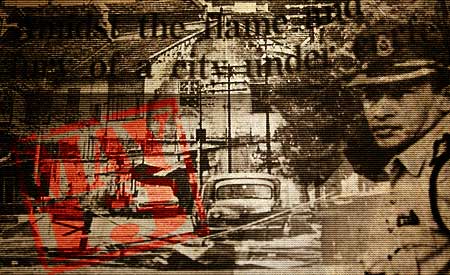 May 13 - at Peace Lane before the storm

COMMENT | It was sometime in April 1969. Maybe earlier. Again, my gallivanting in my village brought me to a house nearby, where I saw a crowd in front of a wooden house. To reach that place I had to take several small streets or lorong (lane). In the neighbourhood, the street names signify the sense of being in a place most peaceful – of Malaysia in the late sixties. The Malay words used have a carnival of a magical feel. A sense of place. And personal history.

There is Lorong Aman, ('peace'); there is Adil ('justice); there is Jaya, ('victory'); there is Bahagia ('happiness'); there is Sentosa ('contentment'); there is Budiman ('good-heartedness'); there is Merdeka ('freedom') and Rahmat ('blessings'). These are some of the names of the lorong in the Malay kampung I pass by often, to get me from one adventure to another. These are where the people of the “Malay race” lived since the village was opened as a new settlement, even before the British gave the country independence. These names I live in gave me a sense of what the words tell me to feel – peaceful, content, fair, free, and above all a person who is budiman or of one possessing to-the-soul-good-heartedness. A note on the seventies:

Growing up in the early 70s, different words to describe reality, practices, and possibilities were dancing happily around me. Perhaps those street names ...