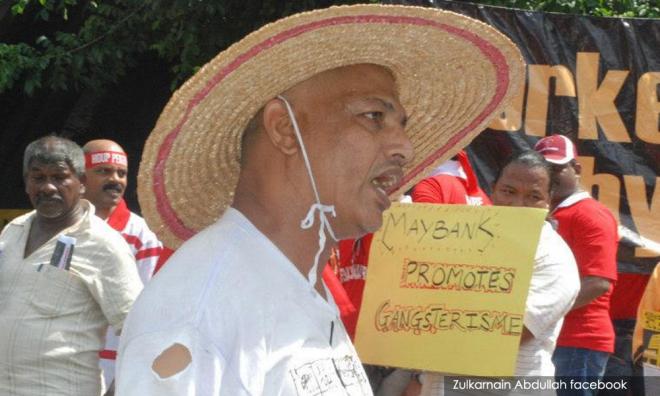 Saudara Zul died yesterday – he never gave up his struggle

COMMENT | The news hit with a Facebook posting from Siti Nor Hamid Tuah, herself the daughter of legendary defender of peasants rights Hamid Tuah.

She said that our friend Saudara Zulkarnain Abdullah had passed away peacefully yesterday morning. He would have turned 63 later this year.

I was stunned and upset. I still am.

I first met Saudara Zul in May, 1995. GE9 had just finished, and BN led by Dr Mahathir Mohamad and Anwar Ibrahim had scored a massive win.

The opposition was in hopeless disarray - Razaleigh Hamzah’s Semangat 46 had no semangat at all, and soon folded back into Umno.

I was, however, disgusted by BN’s arrogance and, through the marvels of this enormous thick device known as the phone book, decided to call the home of one of the defeated Parti Rakyat Malaysia candidates, professor Sanusi Osman.

He gave me the address of PRM and I took two minibuses from Ampang into the heart of Setapak and knocked on the door of a building that had seen better days. There, manning the counter, was Zul. I was later to find that he lived and worked at the party HQ.

He was a boisterous, enthusiastic chap with a memorable smile. After a quick chat he signed me up as a member and for the next few years we were somewhat involved in the same struggle.

By that time, PRM was a small party with many elderly members who had lived through its heyday in the 1960s. Our issues included squatters’ rights, fighting tolls, environmental battles and certain institutional battles like judicial independence and curbing the powers of royalty and the executive. In the pre-internet days, nobody heard the voices of those calling for an ideological opposition to BN’s all-powerful rule.

But Zul was steadfast to the cause.

Hassan Karim, now Pasir Gudang MP, tells me, “I knew Saudara Zulkarnain as far back as 1988 in Johor Bahru. He was then a new member of the Parti Socialis Rakyat Malaysia (PSRM). I was PSRM's secretary-general.

"The PSRM HQ was not in KL or PJ, but in Johor Bahru and the late lawyer Abdul Razak Ahmad was acting PSRM president then.”

“Sdr Zul had just embraced Islam at that time, and he married a Malay woman later,’ he said.

“He was very dedicated to the PSRM struggle. He was an important contributor to PSRM campaigns in the Tanjung Puteri State Legislative Assembly in 1988 and the Johor by-election in the same year.

“When the party changed its name to the original name from PSRM to PRM in 1990 and headquarters moved to Setapak in KL, Sdr Zul, who was originally from Klang, also moved to KL.”

Zul was never afraid to get his hands dirty, nor was he the sort to recoil at threats from police. He believed and he fought.

He was an interesting man and it was decades before I learnt his original name had been Steven Parameswaran. Father to a daughter Farra, he was also fascinated by bodybuilding and was a lover of animals. Cats, dogs and chimps, in particular.

While Reformasi brought fresh vigour to the opposition, it also led to our political paths diverging. Zul did not want PRM’s ‘poor people-first’ ideology to get lost in the Barisan Alternatif coalition.

“He was very proud of the PSRM/PRM legacy. He was very concerned about the fate of the poor and the marginalised. He strongly supported the struggle of the workers.

"After migrating to KL he once worked with a company where he was laid off unjustly and fought a case of wrongful dismissal. He came to JB to see me, ask me to fight his case at the Industrial Court in KL.”

Our longtime party president Syed Husin Ali said to me of Zul: “He was a convert to Islam and a fervent believer in socialism. He was a long-standing member of PRM and very loyal to Razak Ahmad.”

Another comrade, former PRM Youth central committee member Nusrat Md told me: “I first met Sdr Zul when I was 13, following my dad to the PRM Congress at JB. Later on, I helped him make banners at the JB office. He was kind to me, always smiling and very semangat. We used to go to demos together. May Day 2012 was the last one.”

Over the years we have seen many go. Stalwarts like the late Abdul Razak Ahmad, Rustam Sani and Kassim Ahmad have all passed on.

I won’t forget the raw emotions at what I considered to be the final PRM congress before merging with Parti Keadilan Nasional. At a critical juncture, someone shouted: “Who here has gone to jail or ISA detention for the party?” Dozens of white-haired men stood up, and some teared up.

But Zul’s opposition to the merger made him a marginalised figure in the party he had so loved. When Syed Husin Ali and Sanusi Osman sought a mandamus order to dissolve the party in anticipation of its merger, Zul and his colleagues like Koh Swee Yong and Rohana Ariffin challenged that decision. Hassan, now with PKR, served as their lawyer then.

A few years after the party seemingly dissolved and merged into PKR, Zul got his wish – he was a leader of the resurrected PRM. Zul then moved as a PRM activist to KL where he continued to fight issues.

His Facebook account reads “I am a social activist who fights for justice for the victims of discrimination, racism and fanaticism.”

He didn’t deviate although his battle was hard. Even though he resurrected the party, it had little support. He was battling BN and Pakatan Rakyat/Harapan.

Indeed he teamed up with Parti Sosialis Malaysia and his new PRM took in some disgruntled former elected reps like ex-Teratai assemblyperson Jenice Lee and former Kapar MP S Manikavasagam. But instead of getting stronger, he was marginalised in that incarnation of the party too.

During most of his tenure in the resurrected party, Rohana was party president. “He was my close comrade and we fought to keep PRM on the progressive track. We had a difficult time. We were shunned by many others who had been with us in the opposition struggle.

"But we went to Bersih, Lynas, May Day marches. The last demo I went with him was near parliament demanding a minimum wage.

“He remained with me all throughout. I remember one Bersih march, we were prepared with salt and water, but he insisted on having breakfast first. Even though I was impatient, I waited with him, but when the march started, he ditched me and walked with Chua Jui Meng instead. I teased him that he only walked with famous people!”

“Another thing was he and his wife always make jam tarts, but sell so cheap. He said he didn’t want to make money from friends. I told him you cannot apply socialist principles to business, but that is just how he was,” said Rohana.

When I met Zul, I used to urge him not to be stubborn, to quit and join PSM, but he just couldn’t bring himself to. For him, it was always Parti Rakyat. Always.

Interestingly, in later years, he began to see PAS as the greatest threat to stability and progress in Malaysia.

“PAS led by the Big Guru who claims to be able to be the best of the best, but has yet to answer questions from the Rakyat about 90million received from Umno! Also, to date, refuse to declare their personal assets!

“Why are you so desperate for power till you can belittle other laws and systems? Don't put all the eggs in your own basket. Others, too, have better eggs and better, sophisticated baskets too. Respect is to be earned, not demanded!”

He used to send me messages like that as he ranted about the danger of PAS’ conservative dogma. A fan of Mat Sabu, he also added for good measure, “No wonder the real good ones ran away for a better future!”

He also used to point out that he saw many PRM ideas recycled by Pakatan. “Now they are calling it Malaysia Baru – do you know that was the election manifesto drawn by Parti Rakyat in 1994 in anticipation of the coming election?” he asked me.

We spoke regularly and met irregularly. So much so that I just realised there is no photograph of us together. He would press me to support various causes, usually for the landless.

We last spoke in February when I joined Malaysiakini and he asked me to write a story about some homeowners who were cheated. But he was supposed to get some documents and get back to me and we would meet for tea.

In words echoed by Hassan and Rohana, we have lost a loyal friend.