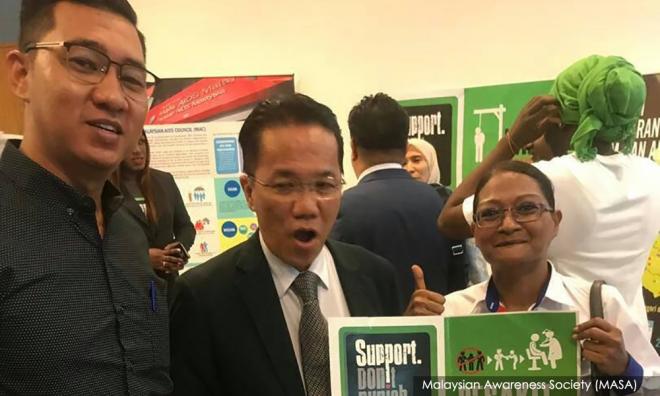 Mainstreaming medical marijuana was her mission

I think I have reached that stage in life when the demise of people I know has accelerated. Just three weeks ago I was writing about the passing of my friend Saudara Zulkarnian Abdullah, a Parti Rakyat Malaysia diehard.

Shortly after that, news filtered through on July 4, that Yuuki Setsuna had passed away that morning.

While Zul was an old friend I’ve known for a quarter century, Yuuki was someone I had never met – in real life at least.

We had only spoken a few times online, mainly about the campaign for the decriminalisation of medical marijuana in her capacity as Malaysian Awareness Society chairperson.

What she had in common with Zul is that both were committed battlers for their cause. Fighting an uphill and lonely battle for a new and better Malaysia.

And you know something? If we ever get there, it’s because of people like them

Yuuki’s real name was Intan Mustika Putri Mokhtar. She was 41 when she died of kidney failure. A mother of two who was from Cheras, she worked in customer centres handling clients like Singapore Airlines, and before that she was with a testing centre handling ETS and TOEFL candidates.

Her life changed many years ago when she was diagnosed with hypokalemia, which left her weak and in crippling pain.

I didn’t know all this until after she died and I read a moving interview with Marc Emery, in which Yuuki describes how her journey began with an illness.

It was an illness so painful that she felt she could not cope. Turning to marijuana significantly helped improve her quality of life, but it came at a price. Intense harassment which led to jailing and assaults of family members.

But Yuuki was determined that instead of backing down, she would put herself on the line to draw attention to the battle for acceptance of medical marijuana and the decriminalisation of the drug.

She wrote in 2016: “I cannot tolerate this injustice and violation of our fundamental humanity, so our fight for the movement of cannabis medicine and our human rights continues. We managed to get attention.”

“Suddenly, the MalaysiaMedicalMarijuana page is viral on facebook in Malaysia, and medical knowledge comes through the world into Malaysia despite the language barriers. I will not be cowed, but it requires nerves of steel and sometimes it’s a bit much.”

Her husband Zam told me how they first met. “I met her in February 2006 at the KTM Bdr Tasik Selatan. She's a bit limp and falls easily. At first, I thought she's a bit clumsy but then she told me that she has hypokalemia, which makes her muscle cramp and she is continuously in pain. She first got that when she was in her early '20s.”

Despite positive signs around the world on the legalisation and decriminalisation of medical marijuana, it was still very tough for Yuuki and her family.

“Things are still the same,” says Zam. “We still struggle with the law, the perception and I still bear an ex-convict title. But the spirit comes from the people who support and have faith in medical cannabis, especially from the patients who are in need. I think this is what brings Yuuki to the next level of activism. She inspires people with her experiences.”

He recounted a tragic incident in 2015 in which prejudice played a part. “She was pregnant with our first baby after eight years of waiting. The pregnancy was ok, but her case was transferred to a big hospital due to her complications and medical history.”

“One day, she was bleeding and I rushed her to Emergency. As soon as we arrived, they checked her file and it was stated there that she was ‘using cannabis to curb with her condition.’

“They refuse to treat her for her bleeding. Both of us were begging them for treatment, but they insisted to refer her to the psychiatric ward. After some argument, we went to another hospital. God saved her that night, but we lost the baby.

“I think she had enough of this discrimination, and I'm sure she doesn't want anyone to suffer like her before.”

I asked Zam if Yuuki ever thought of running away. I mean no one could blame her for relocating to a more accepting environment. “We got an offer from a friend in Canada who runs a cannabis dispensary over there to stay and work with them. But then she loves her people too much.”

One of Yuuki’s fellow campaigners was drug policy reform activist Samantha Chong who was shattered by her friend’s death.

“Yuuki was a friend, a teacher, and a fellow advocate for drug policy reform. A person who had the passion to reach the stars to change the world. If you had talked about the legalisation of medical cannabis 10 years ago, most people would think you are out of your mind.”

“Yuuki was different and she believed change is possible. She created the Facebook page to educate the public about cannabis and how the war on drugs is a war on family institutions. She bravely shared her story about her struggles with her medical condition, and she was one of the key community members that help to change the negative perception of society through an outreach programme.

“She helped to build a strong momentum that ultimately led to the decriminalisation of drug addiction that was announced end-June 2019 by Health Minister Dzulkefly Ahmad.”

Yuuki even wrote an article to rebut a Singapore law minister’s view on medical cannabis and attended forums, protests and interviews for her cause.

Another mutual friend, Fid, is also involved in the movement. “She told me about her illness, and from that moment I decided to join her struggles. I think she knew that she was going to die soon. That's why she struggled so much to raise awareness even though she was in pain. I’m really sad,” Fid told me.

As Malaysia inches its way towards some progressive reforms, we must never forget those of us who were brave enough to speak up for change.

Says Zam of his late wife: “She was a revolutionary, she brought a taboo topic to the mainstream, and she showed another perspective to the audience. She was involved in the 'Support Don't Punish' campaign up to the day before she was admitted to hospital. She is a real fighter who fought to her last breath.”