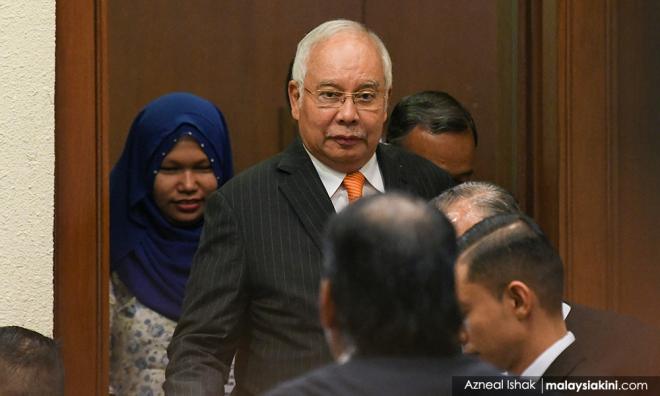 Call for Najib to enter defence is no shock

QUESTION TIME | If anyone had been following the Najib Abdul Razak case involving SRC International Bhd, even from a distance, would it have been a shock for him that the presiding judge ruled that the former prime minister’s defence had to be called?

Not for me, it wasn’t. And the same goes for most of my friends, some of whom were/are prominent lawyers of their time. And it is one of those few instances that I was on the same page as Prime Minister Dr Mahathir Mohamad, who said that he was shocked that Najib was shocked that his defence had to be called.

What I had gathered as a layman (I am not a lawyer), was basically this: That Najib had helped the cabinet approve loans guaranteed by the Malaysian government of some RM4 billion to SRC from the Retirement Fund Inc, KWAP.

Further, RM42 million was deposited into his account from SRC and the money had been used for various purposes. Najib’s defence seemed to be that he was not aware of the money coming to his account and that he was not aware of how it used. He blamed others for the trail of events, which seemed rather improbable and unreasonable to me...
court
najib abdul razak
src international
mahathir mohamad
muhammad shafee abdullah
Related Reports
Hisham believes Dr M did not 'interfere' in Najib's case, PAS advises caution
12 Nov 2019
Najib says not first time Dr M 'shocked', cites Guan Eng's case, forex probe
12 Nov 2019
SRC case: I'm shocked Najib is shocked, says Dr M
11 Nov 2019
Shafee: Najib shocked, expected to be acquitted of all charges
11 Nov 2019