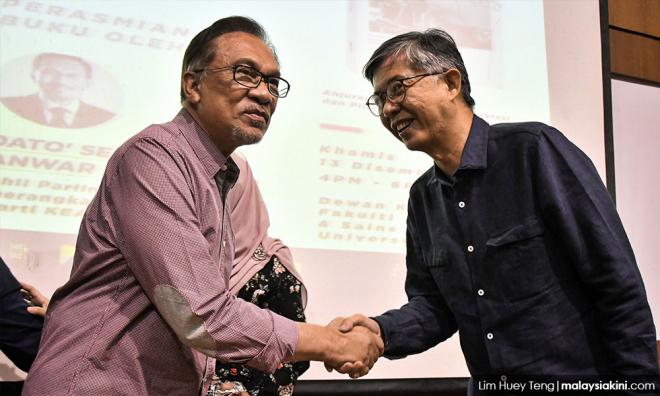 The problem with Tian Chua not calling Anwar the '8th PM'

“Every full-grown emperor requires at least one war, otherwise he would not become famous."

― Erich Maria Remarque, 'All Quiet on the Western Front'

COMMENT | PKR vice-president Tian Chua did a great disservice to party deputy president Azmin Ali in the ongoing fiasco that PKR has presented to its supporters, in the midst of supposedly saving Malaysia. Tian Chua, like Azmin Ali, is part of the next generation of leaders who one assumes have learnt the mistakes of their elders but insists on playing the same games that brought us to this Neo Malaysia.

The only reason why Tian Chua thinks it is “mischievous” for PKR leader Anwar Ibrahim supporters to carry placards naming him the eight prime minister is because, as Tian Chua claims, PKR is split down the middle and Azmin loyalists do not like being reminded that Anwar is the heir apparent to the top job.

Tian Chua also puts the DAP and Amanah in an uncomfortable position by dragging them into this squabble. For instance when he says - “If Anwar is agreed by Harapan, he will take it (the post of PM) when Harapan is ready. It has got nothing to do with the whole public. Then, if Harapan decides that Anwar’s time is up (and) there will be another person, then it will be another person” - what does this mean exactly?

Harapan had decided that Anwar was to assume the top job. The then opposition campaigned on this because the idea of the old maverick retaining power was anathema to the base. Hence this idea that the post of the top job was fluid and that the Harapan decision-making process was a work in progress is disingenuous.

However seeing as how the “Harapan leadership” has backtracked and weaselled its way out the coalition's manifesto, what can you expect from this bunch? Do DAP and Amanah share this view or is this solely the perspective of Azmin's camp?