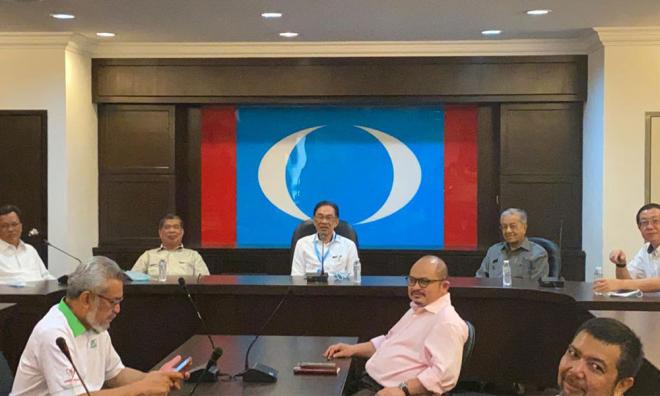 COMMENT | Over the past week, the stalemate over the leadership and composition of Pakatan Harapan Plus (or Minus) has been on show in public.

Pictures of all-male politicians meeting, socially distant from each other, illustrate the political distance these elites have from both a viable solution and from the electorate at large. This uneasy distrustful leadership contestation has been ongoing throughout the Harapan government and was decisive in leading to its collapse.

What is new now is that the parties are facing head-on the intractable leadership issue and they are being asked to choose in a context where it is increasingly hard to win national government. Splits within Harapan and its Plus partners are widening and hardening.

With elections increasingly on the horizon and disengagement among the electorate, a failure to reach a compromise could very well mean the negotiations are a last opportunity in the short and medium term for Harapan to hold national power.

Dr Mahathir Mohamad wants to return to power – a last time to lead. Why he wants a return at the age of almost 95 years old remains a mystery – to be back in control, to address the abuses of the Najib Razak administration that was not addressed in the 21 months he was in office, to correct his mistakes of using divide-and-rule tactics to break apart the coalition, to finally honour his promise to pass the baton, to introduce the reforms he said he would do … the list can go on.

Mahathir nevertheless brings the ‘plus’ numbers with him who only want to partner with him and ultimately comprise the numbers to form a potential majority government – to give Harapan a possible chance to return to power as a coalition as long as there are enough numbers (at least 120 for a stable majority) and clarity in who is in charge.

Anwar wants to cut in – or rather his own leadership. As he believes he brings more dancers to the party, he is demanding more. He is under the illusion that he is in a position of strength, not fully appreciating that many within Harapan (and some within his own party) are also eager to join with Mahathir and are increasingly frustrated that Anwar’s main concern appears to hog the dance floor for himself.

Anwar’s party, PKR, is not the largest in the coalition – and this means compromising with the other political parties. Anwar has apparently failed to