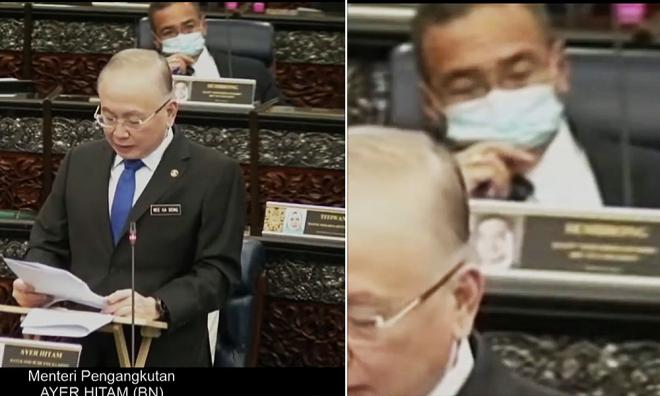 COMMENT | Sometimes, you realise the true character of a person, by way of a photo, or deed.

The photo of Hishammuddin Hussein, vaping in Parliament (above) showed his arrogance, a mark of disrespect for his colleagues and contempt for Parliament. Worst of all, it proves that Hishammuddin is an ineffectual and "rules-don't-apply-to-me" Umno-Baru politician. He only apologised because he had been exposed.

Muhyiddin Yassin's denouement came with his infamous "I am Malay first, Malaysian second" remark. Rewarding those who supported his back-door entry into Putrajaya plunged the nation into a state of pessimism. This prime minister's popularity is fragile and he has done untold damage to the Malay psyche and community.

The new Dewan Rakyat Speaker, Azhar Azizan Harun, giving the thumbs-up sign with 17 of his new friends whilst feasting on an expensive snack of freshwater prawns, was an insult to the rakyat. Sandwiched between Muhyiddin, and the racist and sexist Abdul Azeez Abdul Rahim, the former social activist had no qualms about dining at the rakyat's expense. We know where Azhar's loyalty lies.

Azhar also knows on which side his bread is buttered. When former finance minister Lim Guan Eng repeatedly asked Zafrul Abdul Aziz if the US$3.9 billion settlement by Goldman Sachs had been agreed by the cabinet, Speaker Azhar leapt to Zafrul's defence. Parliament descended into chaos and again, Azhar failed to control the Dewan.

In the case of the felon Najib Abdul Razak, it was not a photo but a video which showed that he was born with a golden foot in his mouth...