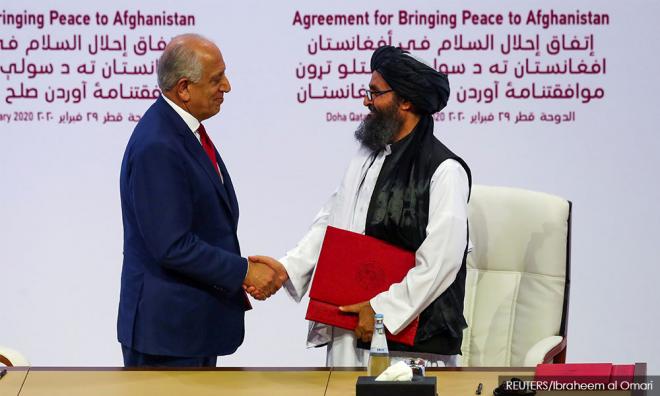 COMMENT | Today, the long-awaited intra-Afghan peace negotiation commences in Doha, Qatar. This vitally important direct negotiation between the Afghan government and the Taliban represent a step forward in ending the war and bringing a just and durable peace to Afghanistan.

It has been for over four decades since ‘peace’ has given way to destructive wars and violence in Afghanistan. History reveals, these wars were, and still are, imposed on this strategically important country, leaving Afghans with no choice but to resist and defend the territorial integrity, sovereignty and independence of their homeland.

The Anglo-Afghan wars (1839-42; 1878-80; 1919), the Soviet-Afghan War (1979-1989) and the so-called ‘war on terrorism’ are the main testament to this assertion. Although in these imposed wars, Afghanistan prevailed but she was not given a chance to establish a just and durable peace. She only enjoyed peace in the interval between these wars but the PAX (peace) short-lived, as violence and war reoccurred when the former Soviet Union invaded Afghanistan and the Soviet-Afghan War ensued causing massive death, destruction and displacements.

However, without achieving anything out of that senseless and legally questionable war, the former Soviet Union compelled to pull out her Red Army and end the war but, soon thereafter, disintegrated and fall to pieces, out of which 15 new independent States emerged while her international responsibility was taken over by Russia.

The victor of the Soviet-Afghan War, the ‘Mujahidin’ (consisting numerous political parties) deposed the Soviet backed government and seized power in Afghanistan in 1992. Soon thereafter, the rival Mujahidin groups turned against each other and a lethal civil war ensued that continued (1992-1996) until an armed group, the ‘Taliban’, emerged and gained control of most areas of the country in 1996 and established a “totalitarian” de facto government under the banner of “Islamic Emirate of Afghanistan.”

In December 2001, an Afghan delegation, backed by the UN, US and Nato diplomats, agreed to form an interim government for Afghanistan, the “Afghan Interim Administration”, in Bonn, Germany. That government, which later renamed as “Transitional Islamic State” and currently called “Islamic Republic of Afghanistan” accommodated the former Mujahidin political leaders but excluded the Taliban.

Consequently, the Taliban regrouped and resisted the US-led invasion of Afghanistan and the war drag on until today causing enormous loss of lives among civilians, not to mention the loss of economic opportunity. According to UN, “almost no civilian in Afghanistan has escaped being personally affected in some way by the ongoing violence”.

It is clear that the conflict in Afghanistan has no military solution. All the stakeholders to this conflict, including America, the government of the Islamic Republic of Afghanistan, the Taliban, the UN and most importantly the people of Afghanistan, share this view.

Recently, Tadamichi Yamamoto, the UN secretary-general’s special representative for Afghanistan, stated that “it is absolutely imperative for all the parties to stop the fighting, as peace is long overdue; civilian lives must be protected and efforts for peace are underway”.

Yes, efforts for a peaceful settlement to the ongoing war in Afghanistan are underway and thus peace is now within reach. In February 2020, the United States and the Taliban signed a peace agreement in Doha, Qatar and at the same time, the US signed a declaration with the government of the Islamic Republic of Afghanistan encouraging it to start an intra-Afghan peace process.

The long-awaited intra-Afghan peace negotiation commences today (Sept 12) in Doha, Qatar. This historic opportunity must not be squandered. The parties must enter the negotiation in good faith and with the sole desire to end the four decades of war and bloodshed in Afghanistan. If the Taliban can make peace with America, there is no reason why this group cannot make peace with their own Afghan brothers and sisters. The negotiating parties should give Afghanistan a chance to live in peace with herself and the rest of the world.